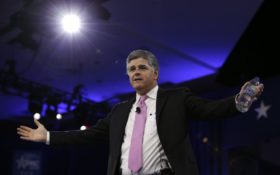 Luxury carmaker Cadillac is the only new company to publicly back away from Hannity since the boycott by Media Matters for America was announced.

Media Matters says it’s playing the long game and that there is a lot more going on behind the scenes. Media Matters says Hannity has gone beyond hosting an opinion show to becoming an active campaigner for President Donald Trump.

Trump supporters say they have Hannity’s back, and they’ve gone after companies that have wavered on Hannity.