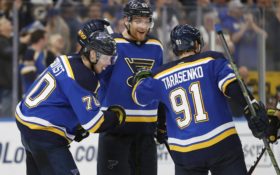 “Not really,” the legendary coach said. “Because we didn’t have a big opportunity to win that series.”

Orr and the big, bad Boston Bruins swept Bowman’s overmatched, expansion-era Blues in that series. Now 49 years later, Boston is in its third final in nine seasons and St. Louis is back for the first time since 1970, but this Bruins-Blues rematch is a showdown between two of the NHL’s best teams since Jan. 1.

“Now it’s more level,” Bowman said. ”(The Blues) don’t give a lot of room in their end, and of course their goalie’s been lights out.”

Coming off a sweep of Carolina in the Eastern Conference final, the Bruins are favored in the series that begins Monday in Boston. Goaltender Tuukka Rask is the front-runner to win the Conn Smythe Trophy as playoff MVP. Brad Marchand is playing some of the best hockey of his career with 18 points in 17 games, and there’s a mix of veterans from the 2011 Stanley Cup-winning team and fresh players eager to get their names etched on the trophy.

“I think as you get older, you appreciate it even more, and you realize how hard it is to get to this point and advance and be thankful and stay in the moment,” center Patrice Bergeron said. “But then it’s back to work, and there’s a lot of work in front of us.”

Unlike in 1970, when the Bruins essentially just had to step on the ice to take the final, these Blues won’t go away. They woke up last in the league Jan. 3 before winning 30 of their final 45 games to roll into the playoffs, where they beat the Winnipeg Jets, Dallas Stars and San Jose Sharks.

Bowman, who has coached a record nine Cup champions, only in recent days realized the Blues hadn’t been to the final since he was there. He met his wife, Suzanne, when she was a nurse in St. Louis and he has a soft spot for this team because of connections to former players of his: consultant/assistant coach Larry Robinson and ambassadors Bob Plager and Brett Hull.

He also likes the size of the Blues’ blue line.

“They’re all big, every one of them,” Bowman said. “Their defense is very big and the right type of aggressiveness. They don’t take a ton of penalties.”

The Blues and Bruins are among the most disciplined teams in the playoffs, which has helped them reach this point. Now they’ll have to deal with another issue: idle hands with so much time off.

Boston will have a week and a half between finishing off Carolina and Game 1, and even St. Louis will go six days without playing. Bowman during his coaching career recalled making his players scrimmage at night to keep them in a rhythm, but there’s no real substitute for the grind of the playoffs.

“I can’t believe how long they’re going to have to sit out,” Bowman said. “It’s quite a trick because they were on such a high.”