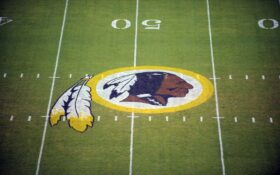 President Donald Trump on Monday criticized a pair of pro sports teams that are considering name changes in the wake of a national reckoning over racial injustice and inequality.

Trump tweeted, “They name teams out of STRENGTH, not weakness, but now the Washington Redskins & Cleveland Indians, two fabled sports franchises, look like they are going to be changing their names in order to be politically correct.”

The NFL’s Redskins announced Friday that they had begun a “thorough review” of their name, which has been deemed offensive by Native American groups for decades. The Redskins’ decision came after FedEx, which paid $205 million for naming rights to the team’s stadium, and other corporate partners called for the team to change its nickname.

Hours later, the Indians Major League Baseball team announced that they, too, will review their long-debated name.

“We are committed to making a positive impact in our community and embrace our responsibility to advance social justice and equality,” the team said in a statement.

On Sunday, Indians manager Terry Francona said he approved of the team’s decision, saying it was “time to move forward.”

Cleveland All-Star shortstop Francisco Lindor is also in favor of the Indians changing their nickname, which they’ve had since 1915.

“If changing the name brings more love and more peace to society, I’m open to listening to the change of names,” Lindor said Monday. “I know society is shifting and we are due for some change. So along those guidelines, yeah, I’m open for a change in name if it’s going to bring love and happiness and more peace to the world.”

Trump has spent the last few days stoking divisions and exploiting racial tensions, accusing protesters who have pushed for racial justice of engaging in a “merciless campaign to wipe out our history.” Earlier Monday, he lashed out at NASCAR and wrongly accused the sport’s only full-time Black driver of perpetrating “a hoax” when a crew member found a noose in the team garage stall.

Trump had tweeted in 2013 that then-President Barack Obama “should not be telling the Washington Redskins to change their name” because “our country has far bigger problems! FOCUS on them, not nonsense.”