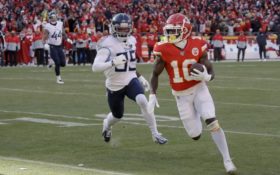 Kansas City Chiefs wide receiver Tyreek Hill dropped to his knees and pretended to urinate like a dog on the field when being introduced at the start of the AFC championship game against the Tennessee Titans on Sunday.

It was reminiscent of what Mississippi receiver Elijah Moore was flagged for in a college game against Mississippi State on Thanksgiving. Moore pretended to urinate in the end zone after scoring a potential tying touchdown in the final minute of the Egg Bowl. After a 15-yard penalty against Moore, Ole Miss kicker Luke Logan missed a longer-than-usual extra point in a 21-20 loss.

Odell Beckham Jr., then with the New York Giants, was fined more than $12,000 by the NFL for pretending to urinate in the end zone after scoring a touchdown in a loss at Philadelphia in Week 3 of the 2017 season.

The Chiefs fell behind Tennessee 10-0 before Hill got Kansas City on the scoreboard with an 8-yard touchdown catch from Patrick Mahomes in the first quarter.