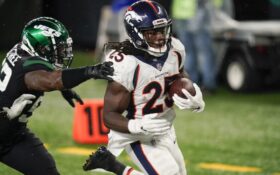 The Broncos sent their leading rusher home after learning he was cited by Denver police for driving under the influence and speeding Tuesday night.

Gordon could face a suspension from the NFL. Last year, Broncos safety Kareem Jackson was suspended for the final two games after a DUI arrest in September in downtown Denver.

Coach Vic Fangio said the Broncos are considering their own discipline of Gordon in addition to whatever punishment the league hands down.

“Everything’s open right now,” Fangio said. “We hope to have a decision made by tomorrow or the next day.”

According to police records, Gordon was cited for driving under the influence and traveling between 25 and 39 mph faster than the posted speed limit when he was pulled over in downtown Denver.

“Yeah, I’m disappointed. But my own two kids have disappointed me at some points in their lives and I never stopped loving them any more,” Fangio said. “And he’s one of us. We’re going to love him. But there will be some consequences to what happened last night.”

Fangio said he didn’t think Gordon violated any of the league’s COVID-19 safety protocols in running afoul of the law Tuesday night.

Gordon’s agent Damarius Bilbo declined to comment when reached by The Associated Press.

Lock said he was disappointed Gordon put himself in this situation but was standing by him.

“Yeah, I was of course upset but we’re also here for him,” Lock said. “It’s like having a brother who gets in trouble. You’re not going to bash him for what he did. You’re going to go pick him up and maybe take him to get some ice cream or something.

“I’m hoping that he can play on Sunday, but obviously that’s not up to me.”

Gordon, who signed a two-year, $16 million free agent deal in the offseason, was coming off his best game, a 107-yard, two-TD performance in Denver’s 37-28 win over the Jets on Oct. 1.

The Broncos were supposed to play at New England last weekend but that game was delayed twice because of the Patriots’ coronavirus infections. The game was first pushed back a day, and after preparing all week, the Broncos gathered Sunday to fly to Boston but instead were told the game was being pushed back a second time, to next weekend.

Fangio then gave his team Sunday, Monday and Tuesday off. Gordon was among several Broncos veterans who complained on social media about essentially losing their bye week.

QB Brett Rypien would have made his second straight start had the Patriots game not been delayed a second time. Now, Lock is expected to start at New England as long as he doesn’t have any setbacks with his shoulder, which he injured Sept. 20 at Pittsburgh.

“I’m really excited to be back. It feels good to just be doing what I love and doing what I feel like I was put down here to do,” Lock said. “It’s great to get back with the guys, calling plays in the huddle, feel the camaraderie of the team.”

Also eager to get back in action is Lindsay, the Broncos’ two-time 1,000-yard rusher who’s been sidelined with at turf toe injury since the opener.

KUSA-TV in Denver first reported Gordon’s citations. The station said Gordon is expected to be arraigned in Denver County Court on Nov. 13, the day before the Broncos fly to Las Vegas for a game against the Raiders.