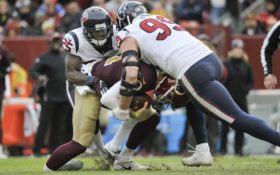 Washington Redskins quarterback Alex Smith has finally shed the massive brace on his right leg eight months after breaking his tibia and fibula in gruesome fashion.

Smith’s wife, Elizabeth, posted a photo Monday of him holding the ring external fixator in his hand. The team’s Twitter account re-posted that picture with the message, “The brace is off! A great step for Alex in his recovery.”

Given the severity of the injury, it’s unlikely Smith plays this season and Washington selected QB Dwayne Haskins in the first round. Smith recently said he plans to play in the NFL again and is under contract through 2022.

Coach Jay Gruden said last month that Smith’s recovery “is going to be a pretty lengthy process.” At the time, Gruden said Smith can throw but was still about a month away from getting rid of the leg brace.