NFL star: I’ll QUIT before I stand for anthem - The Horn News 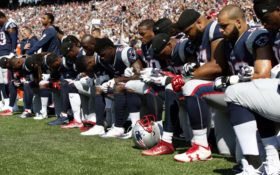 Football star and Tennessee Titans wide receiver Rishard Matthews just spit on the honor of America — but he quickly regretted his decision!

Matthews says he will never stand for the national anthem at NFL games, nor will not stay in the locker room while it’s played.

Rishard Matthews is willing to give up a $6.3 million dollar contract instead of honor America.

According to Matthews, he’s going to make sure he disrespects the American flag in public every game.

Even worse, Matthews said during a conversation with a producer with Nashville’s News4 that he’d would refuse to pay a fine if NFL owners made a new rule requiring players stand for the national anthem — and that he’d rather tear up his multi-million dollar contract than honor America.

It seems Matthews mouth is bigger than his brain, though. Right after the NFL star sent the tweet, he quickly deleted it.

CBS46.com, which first reported this story, shared the following picture of his nasty tweet —

Should the NFL instantly fire ANYONE that kneels during the anthem?