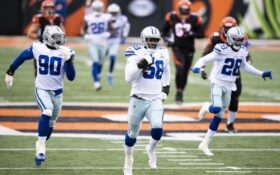 Aldon Smith has turned himself in to authorities in Louisiana after an arrest warrant had been issued for the Seattle Seahawks defensive end.

The sheriff’s office issued the warrant following an incident last weekend. Deputies responding to a call for medical assistance in Meraux on Saturday found a man who said he had been assaulted by an acquaintance outside a business in Chalmette, Sheriff James Pohlmann said. Detectives identified the suspect as Smith, 31, and took out a warrant.

The Seahawks said they are aware of the situation but have declined to comment further.

The incident in Louisiana took place just two days after Smith signed a one-year contract with the Seahawks.

Smith’s off-field troubles are lengthy, including police in San Francisco issuing a warrant for his arrest on a domestic violence charge in 2018, and include four full seasons out of the league due to suspensions. Smith was reinstated by the NFL last spring after signing a one-year deal with the Dallas Cowboys. He had not played in the NFL since 2015.

Smith appeared in 16 games last season for Dallas and had 48 tackles and five sacks.