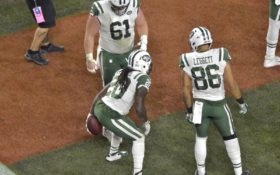 Well, that’s one way to flush some money away.

New York Jets running back Isaiah Crowell was fined $13,369 by the NFL on Tuesday for his crude touchdown celebration in Cleveland.

After scoring against his former team on Sept. 20, Crowell took the football and wiped it against his rear end before firing it into the stands. It made for a viral moment from New York’s 21-17 loss to previously winless Cleveland , and earned Crowell a scolding from coach Todd Bowles.

“It was inexcusable,” Bowles said after the game. “We talked about it and it will never happen again.”

Crowell insisted he wasn’t trying to send a message to the team for which he played four seasons before signing with the Jets as a free agent in March. He said he was just having fun, but felt bad about the unsportsmanlike conduct penalty his celebration drew.

Crowell wasn’t the only player to get a big fine dumped on him.

Poole was called for roughing the passer on New Orleans’ Drew Brees in the second quarter of the Falcons’ 43-37 overtime loss on Sept. 23. The other fine came for his takedown of Taysom Hill in the fourth quarter.

Barr had a facemask penalty on Bills running back Chris Ivory in the first quarter of Minnesota’s 27-6 loss to Buffalo, and was called for a horse-collar on quarterback Josh Allen in the second.

Minnesota’s Linval Joseph and Pittsburgh’s Sean Davis were both docked $20,054 for illegal hits on quarterbacks.

Denver rookie running back Phillip Lindsay was fined $10,026 for unnecessary roughness after he was ejected from the Broncos’ 27-14 loss at Baltimore in Week 3 for throwing a punch.