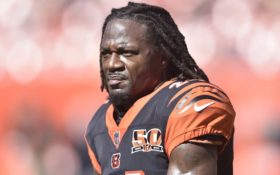 Police say former Cincinnati Bengals cornerback Adam “Pacman” Jones was attacked during a run-in with a facility-service employee at the airport in Atlanta.

Cellphone video footage shows that Jones and Ragin traded several punches with each other. Jones ultimately knocked Ragin down to the ground with a punch to the face then hit the employee one more time before a man broke up the fight.

Daugherty says that at some point during the fight, Ragin ended up hitting a woman who was with Jones, injuring her hand. He says Ragin was the aggressor and Jones defended himself.

Ragin was arrested on two counts of battery and taken to a nearby hospital to be treated for injuries.

Even though police determined Jones wasn’t at fault, the NFL veteran has had other off-the-field issues. He pleaded guilty to misdemeanor charge after his confrontation last year with hotel security personnel and an obscenity-filled tirade against arresting police officers.

Police said Jones kicked and used head-butting as he was arrested for allegedly assaulting a hotel employee. The NFL suspended Jones for one game for a violation of its personal conduct policy.