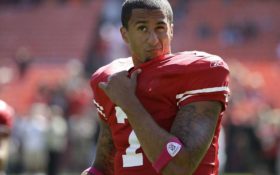 Ever since backup quarterback Colin Kaepernick decided to turn the NFL into a liberal protest, Americans have been turning off the television and staying away from the stadiums.

It has become so bad, overall ratings for the NFL has sunk to their worst ratings in nearly 20 years.

“The 8.4 rating is the lowest for the Week 2 singleheader since at least 1998. The first two NFL windows on CBS this season have both declined double-digits to multi-year lows,” they continued.

No one wants to watch a bunch of overpaid prima donna’s disrespect the American flag? Imagine our lack of surprise.

Television executives have been nervous about 2017 viewership numbers since the NFL ratings decline started last year — and after paying hundreds of millions to the league for broadcast rights, they’re likely panicking over the news of the ratings free-fall.

Numbers also indicate that the issue is the political sideshow the NFL has become, not the sport itself.

“On the other hand, college football has no problem getting viewers,” The Daily Caller reported. “Plenty of unimportant games are still garnering at least a million viewers, which is a pretty clear indication that it’s not football itself that’s becoming unpopular.”

Do you support Colin Kaepernick’s protest against the American flag?

Do you support Colin Kapernick's protest of the American flag?