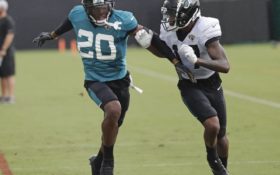 Neither one will make the trip to Minnesota on Tuesday for two days of joint practices and a preseason game. The teams play Saturday.

Fowler was involved in several fights Sunday, including one after practice with fellow defensive end Yannick Ngakoue. Ramsey shouted profanities at media members who captured the altercation on video and later threatened reporters with “war” for releasing the video. Ramsey made his threat via Twitter.

The whole thing seemingly started during practice and carried off the field.

Ngakoue and Fowler exchanged words while leaving practice, prompting a skirmish in which no punches were thrown. Ngakoue and Fowler got into it again outside the practice-field gates and had to be pulled apart by teammates, coaches and security personnel. General manager Dave Caldwell could be seen leading Ngakoue away by the wrist.

The altercation came on the last of 11 consecutive practices in full pads and in sweltering heat and humidity. It also came a few minutes after a scuffle near the end of practice, when Fowler appeared to shove tight end James O’Shaughnessy out of bounds following a reception. Teammates rushed to break it up.

The suspension is the latest issue for Fowler, whose checkered past includes two arrests.

Fowler was arrested last year after confronting a 55-year-old man who made a comment about his driving. St. Petersburg police said Fowler exchanged words with the man before hitting him and knocking off his glasses. Fowler then stepped on the glasses before taking the man’s grocery bag and tossing it in a lake.

Fowler eventually pleaded no contest to misdemeanor charges of battery, criminal mischief and petty theft. The case was closed in March, with Fowler sentenced to a year of probation and 75 hours of community service.

The NFL suspended him without pay for the season opener, a one-game penalty that will cost him $214,000.

Fowler also was arrested in Miami Beach in March 2016 and charged with misdemeanor counts of assault against a police officer and resisting arrest without violence. The charges were later dropped. That arrest came a little more than two weeks after a video surfaced showing Fowler refereeing a fight between his girlfriend and an ex-girlfriend. He also has a long list of traffic violations.

Fowler missed the first two weeks of training camp while recovering from a shoulder injury. He was removed from the physically unable to perform list Saturday, so his altercation with Ngakoue came during his second day of practice.

Fowler, the third overall pick in the 2015 draft, is in the final year of his rookie contract and due to make $3.64 million. He has 14 sacks the last two seasons, including two in the AFC championship game.

Ngakoue, a third-round pick in 2016 who beat out Fowler for the starting job as a rookie, is due to make $735,000 in base salary in 2018. With 20 sacks and 11 forced fumbles in two seasons, Ngakoue is considered one of the cornerstones of Jacksonville’s vaunted defense.

Ramsey is another key piece. The fifth overall pick in the 2015 NFL draft exchanged barbs with Baltimore receiver Steve Smith as a rookie and got ejected for fighting with Cincinnati receiver A.J. Green last season.