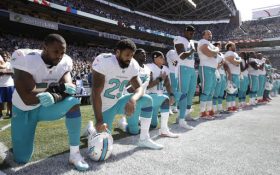 A disaster is looming for the National Football League. As the league heads into the 2018 season, executives have grown nervous about fan backlash regarding anthem kneelers.

If viewers thought there were a lot of empty seats in 2017, this next season will be far worse.

That’s according to Fox News’ latest poll on the NFL’s favorability among registered voters, which shows more people dislike the NFL than like it.

This is the first time in the league’s history it polled more unfavorable than favorable among Americans.

What’s even more jaw dropping in the swiftness of the drop in popularity. Just five short years ago, 64 percent of Americans said they were favorable to the NFL. Only 19 percent said they were unfavorable, a staggering +45 point difference.

“Recent controversies — the handling of sexual assault cases, brain trauma controversies, the anthem issue — seem to have taken a toll on attitudes toward the NFL as an institution,” Pollster Daron Shaw told Fox News.

Empty seats plagued the league throughout 2017 so much, owners finally caved and required players to stand for the anthem (if they’re on the field).

But it seems the move is too little, too late.

Proof the NFL is in VERY big trouble (4 pics)