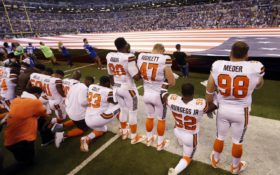 The billionaire owners of NFL teams have been silent as hundreds of their players repeatedly disgrace the American flag and dishonor veterans.

Fans, however, haven’t been so passive. There’s been an increasingly hostile reaction by Americans that are sick of anti-American, liberal politics dominating Sunday football — and the news is getting worse and worse for NFL team owners.

2016, when the protests started, was the lowest-viewed season of football in decades.

This year, the ratings have gotten significantly worse. After three weeks, Nielsen reports that ratings for NFL games are down 11-percent across the board compared to 2016.

“Nielsen said the games averaged 17.63 million viewers for the first three weeks of last season, and have dipped to 15.77 million this year. The 2017 figures don’t include this week’s Monday night game between the Dallas Cowboys and Arizona Cardinals,” Breitbart reported.

The NFL pays hundreds of millions to athletes — and depends on advertising revenue from their television broadcasts to pay for it.

Advertisers have noticed the downturn, too… and are heading out.

Long a cash-cow, advertisers and NFL partners are feeling the heat from angry fans — and one-by-one they’re starting to pull their dollars out of the floundering league.

For example, thanks to immense pressure, television provider DirecTV has started offering fans a full-refunds to customers that purchased their “NFL Sunday Ticket” package — an unprecedented move.

“Once the season starts, fans usually cannot cancel their subscriptions, but AT&T, which owns DirecTV, decided to change the policy due to the sensitivity of the issue. The price of the package, which allows fans to get out-of-market games, is about $280,” ESPN reported.

After players took a “knee during the national anthem played before their games over the weekend, [CEO Allen Jones] said he is through sponsoring the wardrobes or advertising on stations that air the National Football League,” according to Times Free Press.

It’s not just television that’s suffering. For decades, NFL games on Sunday was a destination for hundreds of thousands of patriotic Americans.

Not anymore, it seems.

Fans are tired of coughing up thousands of dollars to see a bunch of millionaires disrespect their country — and it’s gotten embarrassing for the NFL, which is trying to sugar coat the huge attendance downturn.

In Los Angeles’ two team’s season openers, the “Redskins-Rams game at the Coliseum drew 56,612 and the Dolphins-Chargers game at StubHub Center drew 25,381. One night earlier, the Texas-USC [college football game] at the Coliseum drew 84,714, more than the 81,993 combined that showed up for the Rams and the Chargers,” According to The Spokesman-Review.

“At the 49ers’ season opener, as the game wore on, Levi’s Stadium looked more like Kmart five minutes after closing. The stands were so sparsely filled in the third quarter, I thought the Panthers and the 49ers had been sent home at halftime and an MLS game had replaced them,” the Review said.

Fans have been noted burning tickets and throwing away their jersey, like one Indinapolis Colts fan that destroyed thousands of dollars in season tickets in response to the un-American protests.

Without fans paying for tickets and without television audiences tuning in, the NFL is facing serious trouble.

And it could cost NFL owners everything.