NFL owner: ‘Stand for the national anthem or you’re fired’ - The Horn News 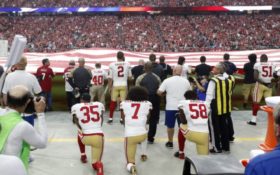 Heading into the 2017 NFL season, Cowboys owner Jerry Jones had a very clear message for his team.

If any of his players kneel during the national anthem, don’t expect to see them back next week.

FYI, Dallas Cowboys' Jerry Jones told his players "You will stand for the National Anthem, or your ass will be off this team."

Last year, backup quarterback Colin Kaepernick made headlines by refusing to stand for the national anthem. Kaepernick is currently unemployed — and Jones isn’t going to tolerate a copy cat on his team.

“I got to give a big pat on the back to our entire team, our coaching staff, our entire organization. We strongly, strongly support the flag in every way we support — and it’s almost ridiculous to be saying it — the people who for generations and generations have given it all up so that we can get out here and show off in front of millions of people on television,” Jones told local radio station 105.3 The Fan last season.

Players would be wise to trust Jones’ conviction — and respect his willingness to fire anyone.

After all, this 2017 season is just shy of 25 years since Jones stunned fans with the firing of coach Jimmy Johnson after consecutive Super Bowl wins.

And Jones is the same guy who dumped Tom Landry, the only coach the Cowboys had known in 29 years, when he first bought the team and hired Johnson, who had no pro experience.

Jones is considered the most powerful NFL owner in the league — and he’s not one to tolerate nonsense.