NFL owner: Kneeling players may be FIRED on Tuesday - The Horn News 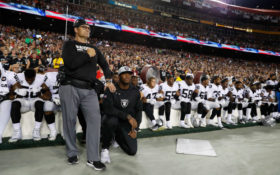 Dallas Cowboys owner Jerry Jones is rumored to have delivered a stern warning to his NFL team, and the message is big if it’s true: If you kneel during the national anthem on Monday Night Football, be prepared to find a new job on Tuesday.

Rumors swirled around social media Monday that everyone on “America’s Team” — from players to coaches to team personnel — received notice that if anyone disrespects America, they’re fired.  No if, ands, or buts.

But is it real?

Some sources say Jones has repeatedly warned that kneeling players will be fired, including Texas Gov. Greg Abbott —

Thank you Jerry Jones: Cowboys Jerry Jones to Players: Stand for the Anthem or you're off team @NFL @dallascowboys https://t.co/DVcrhOpY12

Since the controversy on Sunday, Jones has been notably silent to the press while other owners — including friends of President Donald Trump — have expressed support for their protesting players.

New England Patriots owner Robert Kraft, a longtime supporter of Trump, said Sunday he was “deeply disappointed by the tone of the comments made by the president.” He added that there is “nothing more divisive than politics” and said he supported players’ “right to peacefully affect social change and raise awareness in a manner that they feel is most impactful.”

Trump shrugged off Kraft’s comments, saying: “He’s a good friend of mine, and I want him to do what he wants to do.”

As of this weekend, Jones has yet to comment on the rumors — but if he fires protesting players on Tuesday, his actions will speak louder than words.

In the past, Jones has repeatedly bashed those that kneel during “The Star-Spangled Banner.”

“I do not think the place to express yourself in society is as we recognize the American flag,” Jones told FOX News’ Cheryl Casone last week, prior to Trump’s comments. “So that’s not the place to do anything other than honor the flag, and everybody that’s given up a little bit for it.”

Jones has also gone on the record to defend the American flag.

“I just feel so strongly that the act of recognizing the flag is a salute to our country and all of the people that have sacrificed so that we can have the liberties we have,” Jones said on CBS Dallas radio station 105.3 The Fan. “I feel very strongly that everyone should save that moment for the recognition of the flag in a positive way, so I like the way the Cowboys do it.”

Do you believe Jones will follow through with these rumors and fire liberal protesters on his team?

Will Jerry Jones fire NFL players that disrespect the flag?