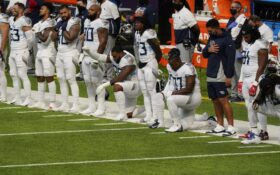 The NFL’s investigation into how Tennessee turned into the league’s first COVID-19 outbreak found “several specific incidents” of the Titans possibly breaking protocols dealing with the coronavirus pandemic, according to a person with knowledge of the probe.

QUIZ: Which Liquor Is Better For Your Health?  [Sponsored]

Also, the headmaster of a private school in Nashville confirmed to The Associated Press on Wednesday that several Titans, including quarterback Ryan Tannehill, practiced on its field Sept. 30. That was a day before the NFL first postponed Tennessee’s game with Pittsburgh before rescheduling to Oct. 25.

NFL Commissioner Roger Goodell warned all 32 teams Monday that following league protocols is mandatory and that violations forcing changes in the schedule could lead to forfeiting games.

Tennessee had two more players test positive Wednesday, a person familiar with the the situation said. The Titans placed starting wide receiver Corey Davis on the reserve/COVID-19 list hours later, bringing their total to 22 cases with 20 returned since Sept. 29.

The Titans cannot return to their facility before Saturday at the earliest, needing back-to-back days without a positive test result. They haven’t been on a field since beating the Vikings 31-30 on Sept. 27. The NFL has to decide if they play Buffalo (4-0) as scheduled Sunday, postpone and reschedule or forfeit.

Titans coach Mike Vrabel said Tuesday any discipline would be something for the NFL to discuss.

“I don’t expect anything either way,” Vrabel said.

The Titans were featured with “several specific incidents” during a call Monday with the league’s general managers and coaches, a person with knowledge of the NFL’s investigation said. Another person familiar with the call said photos from the Titans’ cafeteria were shown.

Both spoke to The Associated Press on condition of anonymity because the investigation is ongoing.

The league is attempting to play a full schedule amid the pandemic without teams isolated in a bubble as other sports have done to protect players and staff from the virus. No games were affected through the first three weeks of the season.

Dr. Allen Sills, the NFL’s chief medical officer, told Judy Battista of the NFL Network the league has looked into everything from video inside the Titans’ facility, interviewing everyone involved and even studied seating charts on buses and planes.

(Sponsored) Have you seen this video yet?

Sills also made clear the league expected positive cases all along.

“The exercises are not just about did someone follow the protocols or not but, are there vulnerabilities we can tighten up, what can we learn and where can we get better and how can we improve going forward,” Sills said. “And we’ve already made a number of those changes.”

Minnesota coach Mike Zimmer said his Vikings went over the new protocols Wednesday for clubs having been been exposed to a team dealing with a COVID-19 outbreak. Having played Tennessee helps his Vikings understand the significance of following the league’s guidelines to stay safe.

Seattle coach Pete Carroll said they’re trying to win games — both football and COVID — which means winning the travel game. He thinks the NFL’s reminders on following the protocol are good for everyone, but being this strict six months ago would’ve been better.

“Had we been this disciplined at the start, across the country, we would never see what we have seen,” Carroll said. “But it’s demanding. It’s difficult. It’s uncomfortable. Sometimes it’s hard to make sense of it, but you got to do it anyway because it’s the right way to handle it.”

The Patriots are dealing with their own COVID-19 cases. Cornerback Stephon Gilmore, the 2019 Defensive Player of the Year, announced on social media he had tested positive and is asymptomatic. Quarterback Cam Newton was placed on the reserve/COVID-19 list Oct. 3, with a defensive tackle from the practice squad added Tuesday.

New England canceled practices Wednesday and Thursday. The Patriots are scheduled to host Denver on Sunday.

WANTED: Men and women over 65 to try this “senior smart pill”   [Sponsored]

Both Sills and Dr. Thom Mayer, the NFL Players Association’s medical director, said the key is everyone following the protocols.

“The virus is still very much a threat not only to our season, but to the safety of everyone in our community,” Mayer said in a statement.

Buffalo coach Sean McDermott is busy preparing his Bills until told differently. He said no one’s perfect and they’re all fighting an uphill battle with how easily COVID-19 spreads. His Bills have had no positives after beating the Raiders 30-23 in Las Vegas last week.

“We have a lot of trust and faith in the league,” McDermott said of playing a game in Tennessee.

Pushing Bills-Titans to Monday night is challenging because Buffalo is scheduled to host Kansas City on Thursday, Oct. 15. That would force the NFL into further rearranging of the schedule.

The Bills aren’t thinking of a forfeit right now.

“We’ll handle that when the time comes,” Bills safety Jordan Poyer said. “Right now, we’re acting like we’re playing. And when that moment comes, where they tell us this, that or the other, I think that’s when we’ll worry about it.”

Bills quarterback Josh Allen said this virus can be as simple as one person going to a grocery store, and Baltimore wide receiver Marquise Brown said the test results show how cautious players must be away from the team facility.

Asked about the chances of the NFL completing this season, Miami quarterback Ryan Fitzpatrick said he thinks everyone is very interested in what happens the next few days.

“Everybody’s confidence level is probably a little less than a few weeks ago,” Fitzpatrick said. “Two weeks ago everybody was riding high. It’s amazing to see what happened in Tennessee so quickly.”

Cleveland quarterback Baker Mayfield had a simple suggestion to keep all of the NFL playing.

“Just wear your masks,” Mayfield said. “We all want to play football. Everybody has to do it. Just do it.”