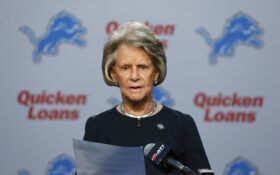 Martha Firestone Ford is stepping down as principal owner of the Detroit Lions.

The Lions announced Tuesday that Ford’s daughter, Sheila Ford Hamp, is taking over as the team’s principal owner and chairman.

“It has been a great honor for our family to be associated with the Lions and with the National Football League,” the 94-year-old Ford said in a statement. “I am gratified that this family tradition, which my husband and I began almost six decades ago, will continue under Sheila’s guiding hand. It is clear to me that Sheila will provide superb leadership and is fully committed to competitive excellence and community involvement.”

Ford had been in charge of the Lions since 2014, when her husband, William Clay Ford, died.

“My mother has inspired all of us since taking on leadership of the Lions over six years ago,” Hamp said. “She has been a tireless leader to our family, our team and our community. Her smart decisions have given me a solid foundation to take the team forward.”

Hamp, 68, has been one of the team’s vice chairmen during her mother’s ownership.

“Martha Ford has led the Lions with skill and grace for the past six seasons,” NFL Commissioner Roger Goodell said. “I have appreciated her business insights, her love of the game, her deep commitment to the NFL, and her personal kindness.

We are pleased that the Ford family will continue to own and operate this historic franchise. Sheila Hamp has become increasingly involved in team and league affairs over the past several years and we look forward to working with her and the rest of the club’s executive team.”

Ford, a granddaughter of tire magnate Harvey Firestone, seldom spoke to reporters or commented publicly on the direction of the franchise, but her influence was felt. In 2015, the team fired its president and general manager in a midseason shakeup, and when she announced the changes, Ford told fans that the franchise intended to “identify and hire the very best leadership in order to produce a consistently, winning football team.”

The Lions eventually hired Bob Quinn as their new general manager, and they made the playoffs in 2016. However, they haven’t been back since. Detroit replaced coach Jim Caldwell with Matt Patricia, who has gone 9-22-1 in his first two seasons.

Although she kept a low profile publicly, Ford was a presence within the organization.

“I think visible ownership is great, and Mrs. Ford does it extremely well,” Caldwell said in 2015. “She’s there before games and she’s there after games, and I think guys enjoy that part of it. She comes to practice and things of that nature, so it’s been fun.”

Ford was one of four female team owners who were profiled in the documentary “A Lifetime of Sundays,” along with Kansas City’s Norma Hunt, Chicago’s Virginia Halas McCaskey, and Pittsburgh’s Patricia Rooney.

Hamp serves on the NFL’s Super Bowl and Major Events Committee and the board for Detroit Lions Charities. She was part of the first class of women to graduate from Yale, where she played tennis.