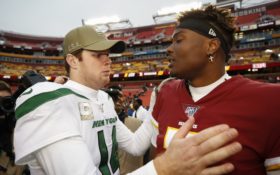 No matter how loud the chants of “Sell the team!” directed at Daniel Snyder were, no matter how sadly empty the stadium was, no matter how poorly his Washington Redskins are playing, no matter how unsuccessful his ownership has been for two decades, there’s no reason to believe he’ll heed that demand.

Still, it’s hard to imagine things getting any worse for a franchise that won three Super Bowls forever ago and could very well end up at 1-15 this season.

The latest debacle for the Redskins came Sunday, manhandled by a bad New York Jets team that led by 31 points before a couple of meaningless late scores ended Washington’s club-record drought of 16 quarters without a touchdown — and the longest such no-TD span in the league in 19 years. The final tally: Jets 34, Redskins 17.

Making the lackluster showing even worse: Washington was coming off a bye.

The first home start of first-round draft pick Dwayne Haskins’ professional career was nothing to be celebrated by the Redskins, who trailed 20-3 at halftime after being outgained 262-60 in total net yards and managing just three first downs to New York’s 16.

“We did the best we could,” said interim coach Bill Callahan, who took over after Jay Gruden was fired at 0-5, “but to no avail.”

And remember: These Jets came into the day with the NFL’s worst offense and a 2-7 record. They left looking like the Greatest Show on Turf.

Sam Darnold threw a career-high four TD passes against a Redskins defense that’s been a disaster throughout their 1-9 start.

All the while, choruses of “J-E-T-S!” rang out near the visitors’ sideline, leading Darnold to note: “It was awesome to have our fans out there like that. Almost felt like a home game.”

It’s a far cry from the home-field advantage the Redskins enjoyed in the old days at RFK Stadium in D.C., back when the fans would make the stands bounce. Oh, and back when the team was competitive. Was good, even. Or, seen through another prism, really mattered.

Now the area has recent winners in other sports — from, in order, the Stanley Cup champion Capitals to the WNBA champion Mystics to the World Series champion Nationals.

Under Snyder’s stewardship, and with the help of right-hand man Bruce Allen, the Redskins are bad on the field and one flub after another off it, too.

No wonder fans stay away or sound fed up.