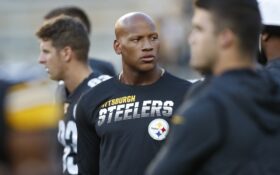 Ryan Shazier wants to make something clear. His comeback from a spinal injury suffered nearly three years ago remains very much on course.

The end, however, won’t include the Pittsburgh Steelers linebacker triumphantly running out onto the Heinz Field turf wearing his No. 50 jersey while waving a Terrible Towel.

For all the progress he’s made since that frightening night in Cincinnati in December 2017 — when Shazier’s ever-churning legs went lifeless following a routine tackle on Bengals wide receiver Josh Malone — standing in the huddle next to good friend and “Shake and Bake” partner Vince Williams is no longer an option.

Just don’t mistake the retirement Shazier announced Wednesday as succumbing to the inevitable. He’s still playing the game. Just in a different way. And he can still hit. Just ask his oldest son Ryan Jr.

The two-time Pro Bowler insists he’s not angry at how things turned out. He’s not upset a play that began so innocently ended up requiring him to undergo spine stabilization surgery. That procedure forced him to the physically unable to perform list in 2018 and 2019 even as his rehabilitation became an inspirational touchstone.

Less than six months removed from leaving Paul Brown Stadium in an ambulance unsure if he would walk again, Shazier strode out onto the stage at the 2018 NFL draft to announce the Steelers’ first-round pick. He became a fixture at the club’s practice facility. Social media posts chronicling his progress have frequently gone viral, replete with the #Shalieve hashtag.

Shazier, taken with the 15th overall pick in 2014, understands his grace and grit in the midst of such a shocking setback have turned him into an icon of sorts on the merits of perseverance. It’s a responsibility he will gladly shoulder heading into the next chapter of his life.

In addition to beginning an NFL-centric podcast, Shazier plans to devote more time to the Shalieve Fight Foundation, which is dedicated to assisting people with spinal cord injuries.

“I just want to continue to help out others,” Shazier said. “And we are revamping some things around to be able to help people out a lot more than we have before, and I am really excited about what the future holds for that.”

The Steelers placed Shazier on the reserved/retired list in March in what was essentially just a paper move. Yet as the COVID-19 pandemic ravaged the offseason schedule, Shazier and his family sat down to weigh his options. Shazier opted to move on partly out of respect to his teammates. He didn’t feel comfortable having his status hanging over a locker room where his stall has been largely untouched for the past 33 months.

“My rehab is continuing to still get better but I just feel that God had another plan for me and you know, I wanted the Steelers to go into the season excited about this season,” Shazier said.

He is certainly excited about moving forward with his wife Michelle and his sons Ryan Jr. and Lyon. Shazier insists he’s at peace with his decision and while he will explore opportunities outside of the organization, he didn’t rule out a potential return. He’s served as a coach/mentor/scout for much of the last three years. General manager Kevin Colbert left no doubt that Shazier will have a place within the organization whenever he wants it.

“You can retire from the game of football, but you’re never going to retire from being a Pittsburgh Steeler,” Colbert said while crashing the video teleconference.

Shazier insists his passion for the sport has not waned. He spent 20 years sprinting down the path laid out in front of him, a journey that led him to Ohio State and eventually the NFL. He’s financially secure. He’s healthy enough to live a normal life. It’s more than he could ask for.

“At the end of the day, I feel in love with this game,” he said. “Some people fall in love with people, you get mad at them, but you know, you always make up – and that’s how I feel about the game of football.”

That feeling that will stick with him even as he gets on with his life’s work outside of the game. His legacy — both on and off the field — is secure. If anything, his goal is to make sure it grows in the years to come.

“I’m going to continue to inspire people and let them know, ’Hey, you might be in a situation you never thought you’d be in, but if you continue to work hard and continue to try to get better, you know the sky’s the limit,” he said. “So continue to push forward.”