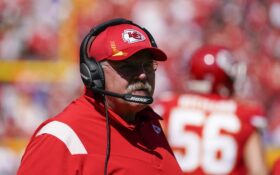 The Chiefs released a statement Sunday night saying Reid was evaluated by the medical staff in the locker room after the game and was transported to The University of Kansas Health System for further evaluation as a precaution. They have not disclosed the cause of the medical emergency.

The 63-year-old Reid was feeling ill but coached the duration of the game, a team spokesman said.

In fact, quarterback Patrick Mahomes said his coach “seemed fine on the sideline as well” as the Chiefs (1-2) threw away an opportunity to beat the Chargers with four turnovers, several costly penalties, and numerous missed assignments.

“He came in and talked to us and he seemed fine,” Mahomes said of the postgame locker room. “That’s all I really know.”

The Chiefs began the game by turning over the ball on three straight possessions, including a pair of fumbles and a pass from Mahomes that bounced off his intended wide receiver and into the hands of the Chargers’ Asante Samuel Jr.

It might as well have ended with with 1:42 left in the fourth quarter, when Mahomes threw another interception .

The game was still tied at that point, but their suspect defense — which had allowed 12 straight red-zone trips to turn into touchdowns to start the season — seemed to make it a foregone conclusion that Los Angeles was headed for the end zone.

The Chiefs allowed a 15-yard pass to Keenan Allen on third down, then DeAndre Baker was called for pass interference on fourth down a few minutes later to give Los Angeles a fresh set of down. Justin Herbert then hit Mike Williams with back-to-back passes, and the second with 32 seconds left in the game gave the Chargers the lead for good.

Asked what Reid said afterward, running back Clyde Edwards-Helaire replied: “Pretty much it’s not going to be over-the-top as far as him getting on us. We know what we did wrong. We know what we need to get corrected.”

“He came and told us — it’s not necessarily going to be all right, but it’s things that we can get fixed that can make it all right. That’s what we need to go in and handle tomorrow. That’s what it is,” Edwards-Helaire added.

“Watch the film tonight, see what we can get corrected, come in tomorrow and handle our business.”

Edwards-Helaire had one of the Chiefs’ two fumbles Sunday, offsetting what was an otherwise solid day with 100 yards rushing and a touchdown reception.

The running back also fumbled in the closing minute last week in Baltimore, preventing the Chiefs from having an opportunity to kick a winning field goal in a 36-35 defeat.

“Anybody can watch the film and you’ll see that we beat ourselves,” Edwards-Helaire said. “It’s those small, minute details that hurt us. Like we say, ‘It’s a game of inches.’ It’s going to be those small things we see on film: a step here, a step there that we feel like will make a difference. We had four turnovers and it still came down to the wire.”

I’m praying for my Head Coach & I’m hoping you can send up prayers with me!! One of the best men & teachers I’ve been around!!! GOD please show us your mercy!