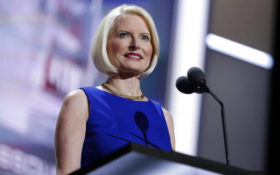 The Trump administration has tapped the wife of former House Speaker Newt Gingrich to be the next U.S. ambassador to the Vatican.

Two people with direct knowledge of the discussions said President Donald Trump will nominate Callista Gingrich for the post. The officials spoke on condition of anonymity because they were not authorized to speak publicly before an official announcement.

The decision comes ahead of Trump’s first foreign trip, which includes a stop at the Vatican.

Callista Gingrich is president of Gingrich Productions and has produced a number of documentaries, including one about Pope John Paul II.

She also served on the House Committee on Agriculture, where she worked as chief clerk until 2007. She was a key figure in her husband’s 2012 bid for the Republican nomination.

The White House did not immediately respond to a request for comment.