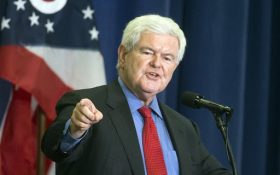 The architect of the Republican Party’s biggest congressional coup has a message for Americans ahead of November’s crucial midterm elections.

Let’s do it again!

Former House Speaker Newt Gingrich, whose 1994 “Contract With America” led to the first Republican House in 40 years, said the nation is on a roll right now – and if you want America’s winning streak to continue, you’d better vote for the GOP!

In other words, tune out the endless shouting on cable TV (if you can). Ignore the angry and unfounded accusations spread by the sore losers on the left. And forget the constant hyperventilating over every little thing President Donald Trump says and does.

Instead, Gingrich wants you to look closer to home.

Look at your wallet and your bank account. Look at the economy. Look at the American business machine kicking into overdrive. And most important of all, look at what still has to be done.

In an editorial for the National Review, Gingrich said the Trump Administration and GOP-led Congress can point to four specific areas of success that have helped Americans in very real ways.

First, there’s the obvious one: JOBS!

“We now have the lowest unemployment in nearly two decades, and African-American unemployment is at its lowest point on record,” he wrote. “Unemployment is at a historic low because American businesses are hiring. Even the New York Times recently ran a headline declaring, ‘We Ran Out of Words to Describe How Good the Jobs Numbers Are.’”

Next up are the tax cuts that Democrats rejected, but led to increases in take-home pay for hard-working Americans.

“Republicans must drive home what the tax cuts meant to their constituents and how those tax cuts transferred power from government back to the American people,” he wrote. “At the same time, candidates can remind voters that House Minority Leader Nancy Pelosi called the tax cuts and bonuses ‘crumbs.’”

Indeed, Pelosi slammed the increases in take-home pay and cash bonuses paid out to workers that in some cases ran thousands of dollars.

“In terms of the bonus that corporate America received versus the crumbs that they are giving to workers to kind of put the schmooze on is so pathetic,” the California Democrat said at the time. “It’s so pathetic.”

This is coming from a San Francisco millionaire who is one of the wealthiest members of Congress. Maybe a few grand is “crumbs” to her, but it’s meaningful to workers who live paycheck to paycheck.

Third, Gingrich said, is deregulation. Getting the feds OUT of businesses… and out of people’s lives.

“The Trump deregulation effort has made it easier and cheaper for people to do business in America – which means small and large companies can hire more people and focus on their work rather than paperwork,” he wrote.

But it’s his last point that’s the most important one: “There is more work to be done.”

Without Republicans leading Congress, the Trump agenda will come grinding to a halt as Democrats obstruct at every turn.

Gingrich knows how to win nationwide in Congress. The “Contract With America” helped the party to win 54 seats in the House during the midterms under President Bill Clinton.

The media now claims there’s a “Blue Wave” coming for Trump, but Gingrich begs to differ. He said the GOP could actually come out ahead, especially in the Senate.

Gingrich told Fox News that the “brutal partisanship” on the left could ultimately cost the part six to eight Senate seats in November, keeping the GOP in control and bringing them close to a filibuster-proof majority.