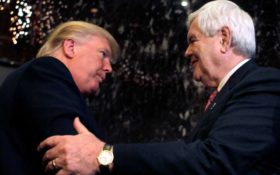 But can the establishment also change him?

Many of Trump’s diehard supporters are no doubt hoping he won’t get pulled into the very swamp he vowed to drain.

But one prominent Trump backer says the president needs to wade into the political muck — at least a little — if he hopes to have a successful presidency.

Former House Speaker Newt Gingrich told Fox News that Trump’s take-no-prisoners style might be going too far, leaving the president increasingly without the allies he needs in Congress.

And that could make it impossible for him to carry out the agenda that won him last year’s election.

“I think he’s in a position right now where he’s much more isolated than he realizes,” Gingrich told Bill Hemmer on Fox News recently.

On the Hill, he has far more people willing to sit to one side and not help him right now, and I think that he needs to recognize that he’s taken a good first step with bringing in General Kelly, but he needs to think about what has not worked. You don’t get down to 35 percent approval and have people in your own party shooting at you and conclude that everything’s going fine.

In a separate interview, Gingrich also warned Trump over his attacks on the two Republican senators from Arizona, John McCain and Jeff Flake.

“He’s going to need both of them this fall, in terms of the agenda. This is not a place to pick a fight,” Gingrich told Fox News. “And I hope he will be more presidential and less confrontational, but look, he is the president and gets to do what he wants.”

While Gingrich is certainly part of the Republican establishment, he has also been one of Trump’s biggest cheerleaders — backing him during the campaign even at times when others were ready to jump ship.

His warning echoes statements made by a prominent Republican lawmaker.

“The president has not yet been able to demonstrate the stability nor some of the competence that he needs to demonstrate in order to be successful,” Sen. Bob Corker of Tennessee, said earlier this month.

Corker is chair of the Senate Foreign Relations Committee, and at one point was such a powerful Trump ally that he was in the running for Secretary of State.

Bitter words from someone still stinging over not getting the State Department gig? Or a warning from a Washington power player that Trump needs on his side?

The White House on Thursday indicated that it’s in no mood to humor him either way.

“I think that’s a ridiculous and outrageous claim and doesn’t even require a response from this podium,” said White House press secretary Sarah Huckabee Sanders.

Horn News readers, we want to hear what you think —

Should the president take heed, tone it down and get more lawmakers on his side?

Or, are these the last desperate cries of the D.C. swamp creatures?

Let us know in the comments!