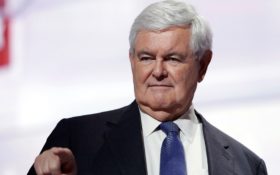 On Monday’s airing of Fox News’ “America’s Newsroom,” former House Speaker Newt Gingrich predicted that Democrats were in for an even “worse shock” on the 2018 midterm election night than they were on the 2016 presidential election night.

Gignrich said that with only five weeks to go before the midterms, the strategy for Republicans and Democrats is to determine, “What America do we want to become?”

The former House Speaker explained that Democrats are “weak” leading up to the election because the average American does not feel represented by the Democratic party.

Fox News host Bill Hemmer read Gingrich a quote from The Washington Post that said, “…the questions facing Democrats — and some Republicans — as the campaign begins in earnest: Should they wade into the mud and make attacking Trump a centerpiece of their efforts, or should they attempt to craft a more uplifting message of their own.”

Hemmer then asked, “So what do they do?”

Gingrich responded with a simple reminder: Prior to the 2016 presidential election night, pollsters predicted that President Donald Trump was going to lose the election.

“Well, if the Democrats can’t get away from being the resistance party — it’s what they spent the last two years on, it started election night. And my prediction, I did this — I just wrote a small paper that’s on Amazon on the 2018 election and I started by linking to an interview I did with Megyn Kelly two weeks before at the election last time when everybody knew Trump was going to lose. People tend to forget this. Everybody knew Trump was going to lose,” he said.

Gingrich continued, ““Well I’m here to say I think the odds are even money, election night 2018 will be an even worse shock for the left than 2016 was.”

The former House Speaker maintained that Democrats’ policies do not align with the average American.