Newsom slammed for hypocrisy after this video - The Horn News 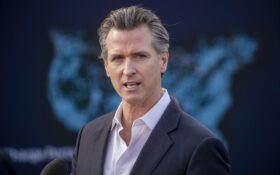 In a video, Newsom urged his constituents to temporarily reduce their strain on the state’s power supply… but some observers noticed something odd about his video.

Newsom said Wednesday, “Today and tomorrow afternoon, after 4 p.m., in particular 4 p.m., turn your thermostat up to 78 degrees or higher and avoid to the extent possible using any really large appliances.”

Yet, the governor was wearing a jacket indoors, despite the heat wave.

Critics speculated that Newsom was cranking his own air conditioning while telling his constituents to avoid theirs.

Some Twitter users slammed Newsom with accusations of hypocrisy. “Rules for us not them,” one user said.

Newsom has displayed his hypocrisy before. During the time of mask mandates, Newsom appeared without a mask at the French Laundry, a three-star restaurant in California’s wine country.

On Wednesday, one observer compared the Newsom’s behavior in the video to his mask hypocrisy at the restaurant. The phrase “French Laundry” trended on Twitter afterward.

Newsom also faced criticism for promoting electric vehicles while warning about “more demand on our electrical grid than ever before.”

Electric vehicles account for only a small share of California’s current demand for energy. However, that demand is growing, and some California residents have urged Newsom to revamp the electrical grid before committing to electric vehicles.

Maybe more electric cars…. Let’s not be smart and push hybrids till the infrastructure is able to handle it

BREAKING: Newsom has ordered the power only be turned on at the French Laundry for his private dinner party

Fortunately, the Golden State managed to avoid a blackout.

California avoided rolling outages during extreme heat, as operators of the state’s electricity grid continued to warn that unprecedented demand on energy supplies could force them to periodically cut power to some customers.

The California Independent System Operator on Wednesday thanked residents and businesses for heeding another “flex alert,” a request to reduce electricity consumption during peak evening hours.

“With your help, we made it through another day without rotating #poweroutages,” Cal-ISO said on Twitter. Another flex alert was issued for Thursday from 3 p.m. to 10 p.m. as temperatures were expected to spike again.

Targeted blackouts were avoided a day after miscommunication led utilities to mistakenly cut power to customers in several California cities.

The confusion occurred Tuesday afternoon between a dispatcher at the Northern California Power Agency, which owns and operates power generating facilities for 16 members including a dozen cities, and the California Independent System Operator as the grid it manages was perilously close to running out of energy amid record-breaking temperatures.

“That is certainly concerning to me,” Elliot Mainzer, president and CEO of Cal-ISO, said Wednesday. “There was a lot happening on the grid for everybody last night. And so we’ll double down on the communication to make sure that doesn’t happen again.”

With record demand on power supplies across the West, California snapped its record energy use around 5 p.m. Tuesday with 52,061 megawatts, far above the previous high of 50,270 megawatts set July 24, 2006.

The Northern California Power Agency said its dispatcher misinterpreted Cal-ISO’s order to prepare to cut power and immediately undertook the process to cut 46 megawatts — enough to serve about 35,000 customers — in the cities of Alameda, Lodi, Santa Clara, Palo Alto, Healdsburg, and Ukiah.

It wasn’t clear how many customers lost power, though the agency said no outage lasted more than an hour.

“Once the outages had been initiated, our dispatcher contacted (Cal-ISO) to inform them that the curtailment action had been undertaken, and was then notified there had been a misunderstanding of the initial order,” NCPA said.

With the state on the brink of outages, Newsom for the first time triggered a wireless emergency alert system at 5:45 p.m. Tuesday that sent messages to 27 million cellphones urging them to turn off or reduce non-essential power.

Within moments, there was a reduction of more than 2,000 megawatts, bringing the state “back from the edge,” Mainzer said.

“It took a very loud signal,” Mainzer said. “I think they now recognize that we’re not messing around. This is a real issue. And we need real response.”

Newsom, speaking Wednesday in Beverly Hills, said he had debated pushing that button for the past four to five days. He ultimately decided to test it and concluded it was a game- changer, though he’s reluctant to use it too often because he fears weakening its effectiveness. The emergency alert was not repeated Wednesday.

Western states are struggling through one of the hottest and longest September heat waves on record. Temperatures began soaring last week, and the National Weather Service warned that dangerous heat could continue through Friday, despite some slight moderation.

Nearly 54 million people were under heat warnings and advisories across the West as temperature records were shattered in many areas.

Reno, which sits just across the Nevada line along the Sierra’s eastern front at an elevation of 4,500 feet (1,372 meters), topped the century mark for the ninth day in a row on Wednesday with its seventh consecutive daily record-high — reaching 104 degrees (40 C) after recording its hottest September day ever on Tuesday at 106 degrees (41.1 C), according to weather service records dating to 1893.

In the last five years, California has experienced the largest and most destructive fires in state history.

Along a main thoroughfare in downtown Billings, where the temperature set a daily record at 102 degrees (39 C), Gale Spotted Bear, native of the Blackfeet Reservation, sought shelter from the punishing heat in the shade of a vacant building.

“This year has been hotter than hell,” said Spotted Bear, adding that homeless people can be hit the hardest if they have nowhere to go. “It’s hard out here.”