Newsmax star explodes in rage when he hears... - The Horn News 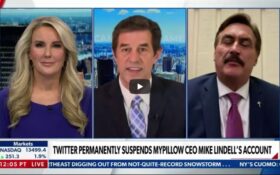 It was the interview that had one conservative commentator asking, “What in the world is going on over at Newsmax?”

Lindell was invited to Newsmax to talk “cancel culture” but the interview quickly went on the rails after Lindell, an outspoken supporter of former President Donald Trump, claimed that mass voter fraud gave Joe Biden the presidency.

Sellers repeatedly talked over Lindell, dismissing his claims of voter fraud before he reportedly “exploded with rage” and walked off the set.

“Well, first mine was taken down because we have all the election fraud with these Dominion machines. We have 100% proof,” Lindell replied. “And when they took it down about three weeks ago, I put it back up…”

“Mike, I thank you very much. Mike, you’re talking about machines that… we at Newsmax have not been able to verify any of those kinds of allegations,” Sellers responded over Lindell. “We just want to let people know there’s nothing substantive that we’ve seen.”

“Let me read you something,” Sellers continued, reading Newsmax’s official statement on election fraud as Lindell spoke in the background.

“While there was clear evidence of some cases of vote fraud and election irregularities, the election results in every state were certified and Newsmax accepts the results as legal and final. The courts have also supported that view.”

Both Lindell and Newsmax have been named in lawsuits and cease-and-desist demands from Dominion over their claims regarding the 2020 election results.

“We wanted to talk to you about ‘cancel culture’,” Sellers continued. “We don’t want to relitigate the allegations that you’re making, Mike.”

“So, let me ask you this: Do you think this should be temporary?” he asked about the Twitter ban. “Because it appears to be permanent. Can you make an argument that it is temporary?”

“No, I want it to be permanent!” a visibly upset Lindell responded. “Because you know what? I’m revealing all the evidence … of election fraud on all these machines.”

Sellers asked his producers to cut Lindell and “get outta here please” and said Lindell’s allegations of mass election fraud were false.

“You are as bad as Twitter, sir!” Lindell responded.

In response, Sellers got up from his desk and stormed off the set as Childers tried to salvage the interview.

You can see the explosive exchange below —