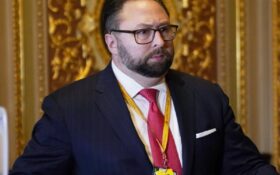 The conservative network Newsmax said Thursday it is hiring Jason Miller, a senior adviser to former President Donald Trump as a contributor who will provide commentary on a variety of issues.

Hiring former politicians and government officials to provide commentary is hardly unusual for television news networks. Hiring somebody when he’s still working for a prominent politician is, although Newsmax has made no secret of its support for Trump.

Miller will be a paid contributor and his deal is non-exclusive, meaning he can still speak freely to other news outlets, said Brian Peterson, a spokesman for the network.

“He is a contributor, not a host or full-time employee,” Peterson said. “We disclose his relationship with the former president. If he becomes active in any political campaigns, we will review his status with us.”

Newsmax had a burst of attention in the days following last November’s election after Trump, who was unhappy with Fox News Channel at the time, urged his followers to check it out.

Many on the network strongly supported Trump’s effort to create doubt about his election loss to President Joe Biden. With Biden inaugurated and Trump receding from the news, Newsmax has seen its ratings slip from heady post-election days.

Meanwhile, when Trump sought to reach his followers this week, he selected Fox News’ Maria Bartiromo for an interview on Tuesday.

Newsmax CEO Christopher Ruddy said Miller and Giuliani “have been Washington insiders without becoming part of the problem. Both of these gentlemen have tremendous track records in media and government, making their analysis of news events even more insightful for our viewers.”