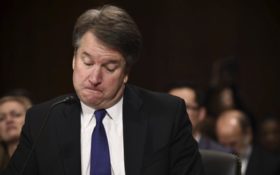 On Monday, The New York Times released a news story criticizing Supreme Court nominee Brett Kavanaugh for his role in a vicious bar fight in 1985. Kavanaugh, The Times said, aggressively used ice cubes on another man in 1985.

Now, the newspaper says it was wrong to have assigned a writer who has regularly criticized Kavanaugh on social media to its “bombshell” story about a few ice cubes from thirty years ago.

The newspaper said that it stood by its story, published Monday, which said Kavanaugh was questioned by police in New Haven, Connecticut, after he was accused of throwing his ice during a fight between other men at a bar 33 years ago. Kavanaugh, who was not arrested, was attending Yale University at the time.

The White House had questioned The Times’ motivation in writing the story because one of its authors, Emily Bazelon, criticized Kavanaugh in July after he was nominated to the court by President Donald Trump.

Bazelon is an instructor at the Yale Law School and a writer for The Times’ magazine. She also writes occasional opinion pieces for the newspaper. She shared a byline on the Kavanaugh story with Ben Protess.

“She is not a news reporter,” said Times’ spokeswoman Eileen Murphy. “Her role in this story was to help colleagues in the newsroom gather public documents in New Haven, where Emily is based. In retrospect, editors should have used a newsroom reporter for that assignment.”

In a July tweet, Bazelon wrote that as a Yale Law graduate and lecturer, “I strongly disassociate myself from tonight’s praise of Brett Kavanaugh. With respect, he’s a 5th vote for a hard-right turn on voting rights and so much more that will harm the democratic process & prevent a more equal society.”

White House press secretary Sarah Huckabee Sanders made note of Bazelon’s comment in a tweet of her own, tying it to what she called a desperate Democratic attack on Kavanaugh.

“What motivated a New York Times reporter to write this ridiculous story?” Sanders wrote. “Throwing ice 33 years ago, or her opinion of Judge Kavanaugh in July?”

Sanders’ deputy, Raj Shah, tweeted that Bazelon went on record “trashing Judge Kavanaugh on purely ideological grounds, previewing her bias. This is supposed to be a straight news reporter.”

Murphy said that “the story is straightforward and fact-based and we fully stand behind it.”

These situations are precisely why many news organizations have been increasingly under fire for their far-left liberal bias.

All that outrage… over a few ice cubes?