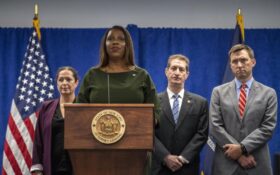 New York’s attorney general sued former President Donald Trump and his company for fraud on Wednesday, alleging they padded his net worth by billions of dollars by manipulating the value of prized assets including golf courses, hotels, and his homes at Trump Tower and Mar-a-Lago.

While the case is civil — not criminal — Attorney General Letitia James said she has made a criminal referral to President Joe Biden’s Department of Justice and to the IRS.

James’ lawsuit, filed in state court in New York, is the culmination of the Democrat’s three-year investigation of Trump and the Trump Organization. Trump’s three eldest children, Donald Jr., Ivanka and Eric Trump, were also named as defendants, along with two longtime company executives, Allen Weisselberg and Jeffrey McConney.

&Sponsored: THIS Food Linked To Age-Related Memory Decline (SHAME on companies selling it) ;

Trump took to his social media platform TruthSocial to fire back —

Another Witch Hunt by a racist Attorney General, Letitia James, who failed in her run for Governor, getting almost zero support from the public, and now is doing poorly against Law & Order A.G. candidate, highly respected Michael Henry. I never thought this case would be brought – until I saw her really bad poll numbers. She is a fraud who campaigned on a “get Trump” platform, despite the fact that the city is one of the crime and murder disasters of the world under her watch!”

Attorney General Letitia “Peekaboo” James, a total crime fighting disaster in New York, is spending all of her time fighting for very powerful and well represented banks and insurance companies, who were fully paid, made a lot of money, and never had a complaint about me, instead of fighting murder and violent crime, which is killing New York State. She is a failed A.G. whose lack of talent in the fight against crime is causing record numbers of people and companies to flee New York. Bye, bye!

The lawsuit strikes at the core of what made Trump famous, taking aim at the wealth and opulence he’s embraced throughout his career — first as a real estate developer, then as a reality TV host on “The Apprentice” and “Celebrity Apprentice,” and later as president.

James is demanding Trump and his business to pay at least $250 million, which she said was the approximate worth of the benefits it got through fraudulent practices.

James said her office filed this civil case after rejecting settlement offers made by lawyers for the defendants.

Supporters of Trump have rallied to the besieged ex-president over this latest legal quandary, dismissing James’ case as a politically motivated “witch hunt.”

She has long been a Never Trumper.

Just look at her previous remarks below. pic.twitter.com/web0QDPULa

The alleged scheme was intended to burnish Trump’s billionaire image and the value of his properties when doing so gave him an advantage, such as in obtaining favorable loan terms, while playing down the value of assets at other times for tax purposes, James’ office said.

Alina Habba, an attorney for Trump, said the lawsuit “is neither focused on the facts nor the law — rather, it is solely focused on advancing the Attorney General’s political agenda.”

“It is abundantly clear that the Attorney General’s Office has exceeded its statutory authority by prying into transactions where absolutely no wrongdoing has taken place,” Habba said. “We are confident that our judicial system will not stand for this unchecked abuse of authority, and we look forward to defending our client against each and every one of the Attorney General’s meritless claims.”

James’ lawsuit comes amid a swirl of unprecedented legal challenges for a former president, including an FBI investigation into Trump’s handling of classified records and inquiries in Georgia over his efforts to contest the results of the 2020 election.

The Trump Organization is also set to go on trial in October in a criminal case alleging that it schemed to give untaxed perks to senior executives, including its longtime finance chief Weisselberg, who alone took more than $1.7 million in extras.

Weisselberg, 75, pleaded guilty Aug. 18. His plea agreement requires him to testify at the company’s trial before he starts a five-month jail sentence. If convicted, the Trump Organization could face a fine of double the amount of unpaid taxes.

Manhattan District Attorney Alvin Bragg had already been conducting a parallel criminal investigation of the same business practices at the heart of James’ civil lawsuit.

All of the legal drama is playing out ahead of the November midterm elections, where Republicans are trying to win control of one or both houses of Congress.

Meanwhile, Trump has been laying the groundwork for a potential comeback campaign for president in 2024 and has accused Biden’s administration of targeting him to hurt his political chances.