New York state subpoenas Ivanka and Don Jr. for this - The Horn News 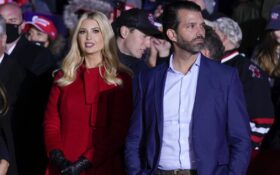 James issued the subpoenas as part of her years-long investigation of former President Donald Trump.

Specifically, James is investigating Trump for allegedly lying about the value of his assets. According to James, Trump could have either inflated his assets to take out loans for the Trump Organization… or deflate them to take advantage of tax benefits.

So far, the fate of this civil investigation remains uncertain.

James also subpoenaed both the former president himself, and she has previously subpoenaed Eric Trump, the Trump Organization’s executive vice president.

Eric Trump provided his testimony in 2020, but the former president’s legal team has moved to throw out his subpoena. So has the lawyer for Ivanka and Don Jr.

Like former Mayor Bill de Blasio, Vance left office last week… but not before receiving an assist from James, who joined the investigation last year.

Vance’s successor, District Attorney Alvin Bragg, will decide for himself whether to pursue additional charges.

According to The Associated Press, Bragg plans lead the existing case himself, along with two assistant district attorneys who had already been working on the case under Vance.

The Trump Organization has accused James of using her office to pursue a political vendetta against the former president, and the organization sued James last month.

“Letitia James is the single most unethical Attorney General this country has ever seen,” Alina Habba, an attorney representing the Trump Organization, told CNN on Monday.

“The way she has weaponized her office through this political witch hunt exceeds all bounds of prosecutorial standards and violates basic constitutional rights. Her actions are a threat to our democracy and I plan to hold her accountable to the fullest extent.”

In a December statement, James accused the former president of filing frivolous lawsuits in order to delay her investigation.

The former president said in a statement last month, “This is not about delay, this is about our Constitution!”

The lawyer for Ivanka and Don Jr. has remained quieter. Their legal team did not respond to CNN’s request for comment.