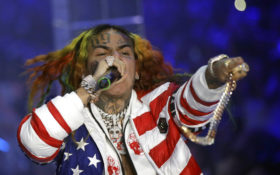 The rapper known as Tekashi 6ix9ine was in federal custody Monday awaiting a Manhattan court appearance.

The Brooklyn-based rapper, whose legal name is Daniel Hernandez, was among four people arrested on racketeering and firearms charges.

An attorney who has previously represented Hernandez did not immediately respond to an email seeking comment Monday.

6ix9ine has been one of the most ascendant and controversial names in hip-hop in recent months. His debut album, Day69, was among the most downloaded records on iTunes following its February release.

But 6ix9ine also has had a series of run-ins with law enforcement and has publicly identified himself as a member of a violent New York gang, 9 Trey Bloods.

He recently pleaded guilty to disorderly conduct in Brooklyn Criminal Court in connection with a May traffic stop.

In a 2015 case in New York, 6ix9ine was sentenced to probation for his involvement in a sexually explicit video of a 13-year-old girl.

The video, posted on social media, showed the girl performing a sex act on another man while 6ix9ine “stands behind the child making a thrusting motion with his pelvis and smacking her on her buttocks,” according to court documents.