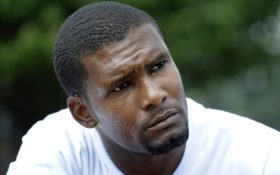 For more than 25 years, the man identified as the triggerman in the death of Michael Jordan’s father has repeatedly declared his innocence in the murder.

Now he’s going before a judge to lay out evidence he says proves that although he helped dispose of the body, he didn’t kill James Jordan in the early-morning darkness one July day in 1993.

“I had nothing to do with this man losing his life, period. I wasn’t connected to the murder. I came in after he was already dead. … The way I look at it is: I denied his family the right to a proper burial because of what I did,” Daniel Green said last week in an interview at the Lumberton Correctional Institution in Robeson County, the same county where Jordan was killed.

Jordan was killed July 23, 1993. His body was found 11 days later in a South Carolina swamp. It wasn’t identified until dental records confirmed it was James Jordan. His body had been cremated except for his jaw and hands, which were saved for identification.

Today, Green goes to court, where defense attorney Chris Mumma and prosecutors from the state attorney’s general office will argue whether he deserves an evidentiary hearing that could lead to a new trial. Mumma says this is the first time a judge will hear all evidence gathered by the defense. The state Court of Appeals upheld his conviction in 1996, as did the state Supreme Court in 1999.

Green was convicted of first-degree murder. His friend, Larry Demery, testified that Green pulled the trigger and killed Jordan in a roadside robbery gone wrong. Both are serving life sentences.

Green, 44, was 18 when Jordan was killed. He’s probably best remembered for a video in which he rapped while wearing an NBA All-Star ring and gold watch that Michael Jordan gave to his father. Green says he got the jewelry from the car console two days later.

Superior Court Judge Winston Gilchrist will hear the arguments in Lee County court in Sanford. Defense filings make various claims. Several people say they saw Green at a family cookout at the time Jordan was killed. Other issues deal with blood-evidence testimony, the handling of Jordan’s shirt, and ineffective trial and appellate counsel.

Green said Demery left the cookout to meet someone for a drug deal and he refused an invitation to accompany Demery. Green said he was just out of prison for a conviction that was later vacated, and a girl “was kissing on” him so there was no way he’d abandon that opportunity.

Demery returned hours later, Green said, and told him he approached Jordan at a motel parking lot because he mistakenly thought Jordan was the drug connection he was supposed to meet. He said Demery told him the two had an altercation and Demery killed Jordan.

If that’s true, then much of what people think they know about the murder is wrong, starting with the notion that James Jordan was killed as he slept in his parked Lexus along Interstate 95.

“I don’t think anybody knows the truth about what happened to James Jordan – the state or the defense,” Mumma said.

Attorney Hugh Rogers, who represented Demery, said no physical evidence tied either man to the shooting.

Green said he and Demery became friends in third grade, when they got into a playground fight and a teacher made them apologize and read books together. When he found out Demery had accused him, Green said, he couldn’t believe it.

As he wore the jewelry and drove around in the red Lexus, Green said he thought he was using the possessions of a drug dealer. He believes he learned he had helped dispose of the body of James Jordan when he read that in news stories.

By that time, Michael Jordan had helped the North Carolina Tar Heels win the 1982 NCAA championship and led the Chicago Bulls to three NBA titles. He would win three more titles with the Bulls; he now owns the Charlotte Hornets. A spokeswoman for Michael Jordan declined to comment on Green’s attempt for a new trial.

In addition to evidence in the defense filings, Green’s lawyers will contend that no one was convicted of actually killing James Jordan. Demery accused Green, but jurors found in the sentencing phase that Green didn’t kill or intend to kill Jordan, and didn’t plan to use deadly force.

The state attorney general’s office says jurors’ opinions at sentencing aren’t relevant to the conviction of first-degree murder under the felony murder rule, which means someone died during the commission of another crime.

The district attorney who prosecuted Green said he doesn’t believe it matters who shot Jordan, although he’s confident the evidence showed Green pulled the trigger.

“If you ask me who killed James Jordan, I’m going to say Daniel Green and Larry Demery,” said Johnson Britt, who retires at the end of the year.