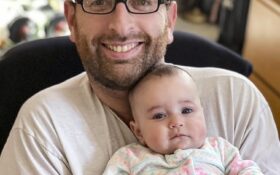 During the first several months of the pandemic in the U.S., Dina Levy made her young daughter and son go on walks with her three times a day.

They kicked a soccer ball around at the nearby high school. The children, then 11 and 8, created an obstacle course out of chalk and the three timed each other running through it. They also ate all their meals together.

Levy is among scores of parents who indicated in a new survey from the U.S. Census Bureau that they spent more time eating, reading and playing with their children from March 2020 to June of 2020, when coronavirus-lockdowns were at their most intense, than they had in previous years.

“With school and work, you split up and go your own way for the day, but during coronavirus, we were a unit,” said Levy, an attorney who lives in New Jersey. “It really was, I don’t want to say worthwhile since this pandemic has been so awful for so many people, but there was a lot of value to us as a family.”

In a report on the survey released this week, the Census Bureau includes some caveats: A large number of people did not respond. Also, compared to previous years, more of the parents in this survey were older, foreign-born, married, educated and above the poverty level. The survey also does not measure the long-term impact of the pandemic, which is now entering its third calendar year, so it is unknown whether the increased time with the children has stuck.

The findings of the Survey of Income and Program Participation are based on interviews with one parent from 22,000 households during the first four months of the pandemic in the U.S. The survey found that the proportion of meals the so-called reference parents shared with their children increased from 84% to 85% from 2018 to 2020, and from 56% to 63% for the other parents.

Some parents also read to their kids more in 2020 compared to previous years, though there were variations based on income, education and other factors. In 2020, 69% of parents reported reading to young children five or more times per week compared with 65% in 2018, and 64% in 2019, the report said.

“Families knew before the pandemic that they were overstressed. Kids had so many places to be. Parents were juggling an awful lot,” Froma Walsh, co-director of the Chicago Center for Family Health at the University of Chicago, said in a phone interview. “The pandemic made people not go to work, and our kids were home. It really helped parents to say, ‘Hey, wait a minute. We are able to have real family time together that we weren’t before.’”

The pandemic also strained many families. The death of loved ones, job losses, financial worries, remote learning, social isolation, and the demands of child and elder care all took a heavy toll, Walsh said.

“The key point is families have experienced extreme stress and strain over the course of this prolonged pandemic,” Walsh said. She said her research shows that families do best when they share positive values, take a creative approach to problem-solving and have the flexibility to adapt.

“Those families that can pull together and practice resilience are doing well, and it actually strengthens their bonds,” she said.

That was certainly the case for Eugene Brusilovskiy, a statistician living in suburban Philadelphia. He said the pandemic allowed him to be with his daughter, who was born during the early months of the virus’s spread. Since he was working from home, he and his wife decided not to put her in day care as originally planned.

“I was involved in every routine, everything from feeding her to changing her diapers,” Brusilovskiy said. “I was able to spend real quality time, to go on walks and watch all of those first milestones that I wouldn’t have been able to do otherwise.”

Although many people are limiting their activities now with the omicron-driven resurgence of the coronavirus, it’s possible that once schools reopened in 2021 and kids returned to their extracurricular pursuits, parents fell back into earlier habits, said Melissa Milkie, a University of Toronto sociologist.

“Still, some families might have experienced eating more dinners together and reading as something they pushed to ‘keep’ even beyond those early months of the pandemic,” Milkie said.

For Levy, the downside of all the meals with her kids was the intense cleanup.

“It drove me crazy,” she said. “It was tons and tons of dirty dishes.”

Still, that wasn’t enough to diminish the once-in-a-lifetime sense of togetherness she was able to forge with her children.

“It was time we had never spent together,” Levy said, “and probably never will again.”