New study: Most who tear Achilles tendon can skip surgery - The Horn News 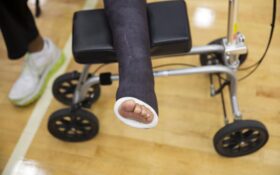 It’s a weekend warrior’s nightmare. You’re playing hoops in the driveway and go up for a lay-up. You land and hear a pop: you’ve torn your Achilles tendon. Do you have surgery or hope it heals with just a cast and rehab? New research says both options led to similar outcomes about a year later.

The Achilles tendon, which connects the muscles in the back of the calf to the heel bone, is the most commonly torn tendon in the body. Most tears are due to trauma or accident while playing sports; men are much more prone to the injury than women.

In the biggest-ever study investigating which treatment is best, scientists in Norway tracked 526 patients — mostly men with an average age of 39 — who ripped their Achilles tendon. They either had minimally invasive surgery, a standard surgery or non-surgical treatment, a brace to immobilize the affected foot and physical therapy. All patients got rehab therapy and were told to avoid risky activities for six months.

“For the average person, who is not a high-performance athlete, there is no need to have surgery,” said Dr. Matthew Costa, a professor of orthopedic trauma surgery at the University of Oxford and not part of the study. Costas said the only benefit to an operation might be to avoid the chance of a repeat injury, but said the chances of that were similar to the risk of a standard complication from surgery, like a wound infection.

He also said surgery could be helpful in other cases, including for people who don’t realize they’ve torn the tendon until long after the injury. In those cases, the tendon may not have been able to heal properly.

Dr. William Levine, chair of orthopedic surgery at Columbia University’s College of Physicians and Surgeons, said patients should talk through their options with their doctor to explore if surgery is appropriate.

“If you tear a tendon, there is a natural healing process in the body that occurs,” Levine explained. “But it may heal in a position that’s not ideal, and surgeons are able to fix it more precisely.”

Dr. Stale Myhrvold, the study’s lead author, said that for people to successfully skip surgery, patients need to have their affected foot in a brace early — within the first three days.

“Most acute Achilles tendon ruptures in adults can be treated non-operatively,” he said in an email. “Most of my patients choose non-operative treatments after receiving this information.”