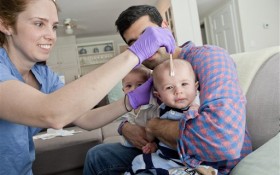 Sharing bacteria in the operating room normally is a no-no but in a novel experiment, researchers are giving babies born by C-section a dose of presumably protective germs from mom’s birth canal.

We share our bodies with microbes — on the skin, in the mouth, in the gut — that help keep us healthy, a community, or microbiome, that starts forming at birth. Usually, a vaginal birth marks babies’ first massive exposure to the bacteria. But babies born by C-section miss out on those particular bugs, something many scientists suspect could have consequences later in life.

Monday, researchers reported the first hint that it’s possible to at least partially restore mom’s missing microbes to babies born surgically, simply by swabbing those infants with their mother’s vaginal fluid within two minutes of birth.

“What we are going to show is how babies assemble their microbiome,” said microbiologist Maria Gloria Dominguez-Bello of New York University, who led the pilot study published in the journal Nature Medicine. “Do C-section babies ever catch up?”

Far more research is needed to prove if the technique really works — or makes a difference in babies’ health.

This first-step attempt to manipulate birth microbes was very small, comparing seven babies born vaginally with 11 born by scheduled C-section, four of whom got that dose of mom’s bacteria. Over the next month, researchers took more than 1,500 samples of different body sites to see how the infants’ own microbiomes were developing.

The specially exposed C-section babies developed microbial neighborhoods that were more similar to vaginally born infants than to the other tots born surgically, Dominguez-Bello reported. In particular, the swabbed babies harbored more of two bacteria species — Lactobacillus and Bacteroides — that are thought to play a role in training the immune system, and that were nearly absent in the untreated C-section babies.

The bigger question is not just how the bugs affect early microbiome development but whether that translates to better health years later. For example, previous studies have suggested babies born by C-section have a higher risk of developing asthma, allergies and certain other health conditions, and no one knows why.

Dominguez-Bello began the pilot study at the University of Puerto Rico but now has expanded it at NYU, with 84 babies enrolled so far whose microbiomes are being tested for a year. Already, she has 13,000 samples waiting to be analyzed if she can find the funding.

“That rationale does make sense,” said Gregor Reid, a microbiology professor at Canada’s University of Western Ontario, who wasn’t involved with the study and wants to see more such research. “The first few years of life are when we are programmed for long-term health. What this study is trying to say is, ‘I wonder how critical the vaginal microbiome is to this whole programming concept?'”

One microbiome specialist didn’t wait for the science. When his own daughter was born by emergency C-section four years ago, Rob Knight of the University of California, San Diego, made sure to try the swabbing technique. Knight’s partner was on board but the couple waited until the doctors and nurses left the room to avoid explaining what likely would have been viewed as, well, unorthodox.

“As an evolutionary biologist and microbiologist, it just made complete sense that we’d want to maximize her ability to get the natural microbes,” Knight said. “We’re talking about something so natural, just restoring the microbes that every mammal has been exposed to for tens of millions of years.”

There’s no way to tell whether that made any difference for Knight’s own daughter, one reason he joined Dominguez-Bello as a co-author of the new research to study whether manipulating microbiomes is feasible.

Other specialists cautioned against a do-it-yourself approach. Mothers-to-be are supposed to be tested for pathogens, such as Group B strep, that could spread during labor — and those in the study were closely scrutinized — but very little is known about the complex mix of vaginal microbes and which are most important.

The consumer message is “don’t do it. We just don’t know enough,” said Jacques Ravel, associate director of the Institute for Genomic Sciences at the University of Maryland. “Not all vaginal microbiota are equally good.”

For now, the best advice is to avoid elective C-sections, and whatever the birth method, mother and baby should get lots of skin-to-skin contact, said Dr. David Relman, a microbiome specialist at Stanford University. Nor should antibiotics be prescribed unless truly necessary, he added, as those medications kill good bacteria along with the bad.