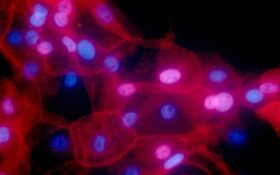 When Chastity Murry had her first psychotic break, she went into her bathroom and downed a whole bottle of pills, hoping to die. Her teenage daughter had to perform CPR to save her life.

Around that same time more than a decade ago, the man who would become her husband, Dante Murry, also lost touch with reality and considered suicide.

Different illnesses led them down similar paths – bipolar disorder in her case and schizoaffective disorder in his – conditions long considered by many to be distinct and unrelated.

But a growing body of research shows that bipolar disorder, schizophrenia and the in-between diagnosis of schizoaffective disorder share common genetic underpinnings as well as overlapping symptoms and signs.

“They can be considered as part of a spectrum,” said Dr. Morgan Sheng, who co-directs a psychiatric research center at the Broad Institute of MIT and Harvard.

The theory that they exist on a continuum has gained ground as more and more studies have found that variations in some of the same genes influence how susceptible people are to these conditions. One of the latest examples is the AKAP11 gene, which scientists at Broad and elsewhere pinpointed as a strong risk factor for bipolar disorder and schizophrenia in research published in the journal Nature Genetics this year.

Experts say these insights will help doctors better understand what drives the illnesses, how they affect the body’s most notoriously bewildering organ and what more can be done to help people. Down the road, experts envision the research could help guide treatment and lead to better drugs. For now, they hope it reinforces the idea that such disorders are biologically rooted and not moral failings or mysterious, unknowable conditions.

“That’s what the science is giving us – a clear indication that there are genetic markers and risk factors,” said Dr. Ken Duckworth, chief medical officer for the National Alliance on Mental Illness.

The Murrys — who met through the alliance and married in 2020 — hope the research provides answers for them and so many others with mental illness who they’ve gotten to know. With they help of doctors and one another, they are keeping their disorders in check and have found purpose helping others in similar straits.

Mental illness runs in both of their families – haunting hers for at least five generations, she says.

Knowing this “helped me to understand why this is happening to me,” Chastity Murry said. “That possibility was always there.”

Sheng said genetics plays a big part in bipolar disorder, schizoaffective disorder and schizophrenia. But experience and environment also play a big part, and these things interact in subtle ways. So it’s not like everyone with risk genes is destined to become ill.

Morgan said a severe risk gene for schizophrenia, for example, may increase the chance of getting the disease 10-fold. But that only brings it up to 10%, since the population-wide risk of developing the illness is 1%. Given those odds, parents with the gene might not have any children with the illness.

But “if you take a whole extended family that has that risk gene, there will be a number of cases popping up,” Morgan said. “It’s a roll of the dice.”

The same is true for schizoaffective disorder, studies show.

There are no tests for these conditions — which together affect around 9 million U.S. adults — so diagnosis is based on history and the sometimes overlapping symptoms. For instance, psychosis can happen in all three illnesses.

This can make diagnosis difficult. Sally Littlefield of Oakland, California, was diagnosed with bipolar disorder, then schizoaffective disorder, after spiraling into psychosis during a work meeting in 2018. For 10 months, she was convinced a team of psychologists had assumed control of her life and were experimenting on her against her will.

At one point during a manic episode, Littlefield wandered the streets of San Francisco, breaking into houses and cars, shoplifting and jumping from one car rooftop to another. She was eventually tackled by police and hospitalized. She came to realize she was ill when her delusions got so grandiose she believed she was president of the United States.

She said she’s now doing well and willing to tell her story to help dispel stigma, discrimination and shame, which “prevents a lot of us from recovering.”

People with mental illness hope stigma fades as doctors learn more about how these disorders arise and affect the brain.

A 2019 study said a growing number of experts now recognize that schizophrenia, schizoaffective disorder and bipolar not only share common genetic risk factors and symptoms but also look similar in neuroimaging and may have common treatment regimens. The mood stabilizer lithium, for example, is often used to treat bipolar and schizoaffective disorder. The recent Broad Institute research may provide clues to how the drug works, since AKAP11 interacts with what’s thought to be lithium’s target.

Other drugs also treat more than one of the illnesses. The Murrys take several of the same medications.

Someday, experts said genetic insights might allow doctors to intervene earlier in the disease process. While few people get genetic testing now – except perhaps to see how they might react to a particular drug – scientists said that could change in the future. If people knew their genetic risk and family history, Sheng said, they could seek help if something didn’t seem quite right, before an illness caused major problems.

Some scientists, while acknowledging common genetic underpinnings of bipolar, schizoaffective disorder and schizophrenia, are skeptical about framing them as on a psychosis continuum, particularly if that leads to changing categories doctors use to diagnose people with each disorder. They say the current criteria are useful in deciding treatment and care.

Scientists agree that more research is needed. Finding new illness risk genes, for instance, is only the first step toward developing new medicines. A Broad “road map” says researchers must also figure out how the genes function, understand disease mechanisms and identify targets for the drugs.

NAMI’s Duckworth said it might be “5 to 50 years” before genetic findings translate into changes in clinical practice. “It’s a very long journey.”

Meanwhile, many people living with mental illness rely on peer support in addition to medication and psychotherapy. The Murrys check on each other daily.

Both have also learned and grown from working as volunteers. Together, they facilitate support groups twice a week, check in with peers regularly by phone, and have been trained to help people who are suicidal.

“This is my path in life, and his path as well,” Chastity Murry said. “We’re helping them, but they’re also helping us.”