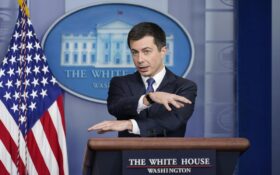 U.S. Transportation Secretary Pete Buttigieg has found himself embroiled in a new scandal about his travel expenses.

An official from former President Donald Trump’s administration was forced to resign over a similar scandal in 2018.

The mainstream media cheered when former Health and Human Services Secretary Tom Price was ousted for wasting tax payer dollars on plane flights, among other things.

But those same legacy media organizations that called for Price to be fired haven’t mentioned Buttigieg’s wasteful spending on plane flights.

“And for someone so holier-than-thou on reducing emissions, Buttigieg sure doesn’t seem to mind the pollution caused by his literal jet-setting,” she reportedly said. “This is hypocrisy at its finest, and these troubling expenses to taxpayers must come under immediate scrutiny.”

Elaine Chao, Buttigieg’s predecessor under Trump, was also criticized by the mainstream media for taking private plane flights 7 times in 2017.

But CNN’s Don Lemon didn’t ask Buttigieg about the scandal when he appeared on Lemon’s new show This Morning on Tuesday.

Instead, the two simply shared a laugh “while discussing queer families” and minivans.