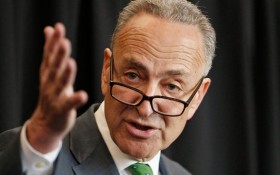 The New York Democrat is expected to formally announce his support Sunday for the “Combat Terrorist Use of Social Media Act of 2015.”

Schumer will sponsor the legislation in the Senate. The bill passed the U.S. House of Representatives on Wednesday.

Schumer says the bill will work to modernize how federal authorities decipher and decode messages on social media to ultimately disrupt planned attacks.

The bill would also require officials to evaluate how extremists use social media to further their causes and seek proposals on how authorities could combat that.