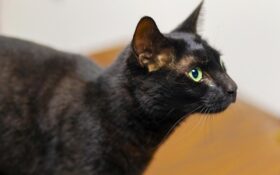 When Mark Winternheimer’s 12-year-old tabby cat was diagnosed with diabetes last year, the treatment was daunting: twice-daily injections of insulin, an implanted monitor and frequent visits to the vet.

Despite their qualms, Winternheimer and his wife, Courtnee, of New Albany, Indiana, learned to give Oliver his shots.

“For us, they’re part of the family,” Winternheimer said of Oliver and their two other cats, Ella and Theo. “You wouldn’t deny another family member care if it’s available.”

“A pill is a huge step forward from a needle,” said Dr. Audrey Cook, a cat veterinarian at Texas A&M University.

One caveat: The pill called Bexacat can’t be used in cats like Oliver, who had previously received insulin.

The biggest benefit may be the ease of use, experts said. While many cat owners successfully treat their cats with twice-daily insulin, often for years, others struggle. Research shows that owners put down 1 in 10 cats with a new diabetes diagnosis. Another 10% are euthanized within a year, in part because of the difficulties of treatment.

“Some people are afraid of giving insulin injections. Some people don’t have the time to dedicate to the care of their cats,” said Dr. Catharine Scott-Moncrieff, a Purdue University veterinarian who consulted with the makers of Bexacat on the product testing.

Made by Elanco Animal Health Inc., Bexacat was approved by the Food and Drug Administration in December and is expected to be available in the U.S. in the next several weeks. It’s the first drug of its type approved for animals; similar drugs have been approved for people for about a decade.

Diabetes, whether in people or pets, is caused when too much glucose, or sugar, builds up in the bloodstream because the pancreas doesn’t produce enough insulin, a hormone, or use it properly. Bexacat lowers blood sugar by causing it to be excreted in urine. Symptoms of feline diabetes include increased thirst and urination, increased appetite and weight loss.

About a quarter of U.S. households include one or more cats, totaling more than 58 million felines. Between 1 in 100 and 1 in 500 cats in the U.S. are diagnosed with diabetes, which is rising as obesity rates in the species approach 50%, said Dr. Bruce Kornreich, director of the Cornell Feline Health Center at Cornell University.

In studies involving more than 300 diabetic cats, Bexacat improved glucose control and decreased at least one symptom of diabetes in more than 80% of newly diagnosed, healthy animals, company documents show. But several cats in the studies also died or had to be euthanized after taking the drug, prompting a so-called black box warning about possible side effects, including diabetic ketoacidosis, a life-threatening complication.

Because of those concerns, the drug can’t be used in cats previously treated with insulin and animals must be carefully screened for liver, kidney and pancreatic disease and to ensure that they’re otherwise healthy, said Scott-Moncrieff.

“It will be life-changing for some cats and some owners, but it’s not for every cat,” Scott-Moncrieff said.

The list price for the drug is about $53 a month, according to Elanco. Most vets will double or triple the cost of the drug, charging pet owners about $100 to $150 a month, said Cook.

Depending on the source, that may be higher than the costs for insulin and the syringes or pens to give it, she said. Cats taking insulin need to be monitored frequently, but cats taking Bexacat will need to be watched, too.

“I think costs will be broadly similar, but there are a lot of variables here,” Cook said.

In Oliver’s case, the cat tolerated the injections — and a glucose monitor that had to be inserted underneath his skin, Winternheimer said. His owners did OK, too, but they were relieved when Oliver’s diabetes went into remission last fall.

No question, the idea of giving Oliver a pill instead would have been appealing, Winternheimer said. “I would have definitely preferred that if it were available.”