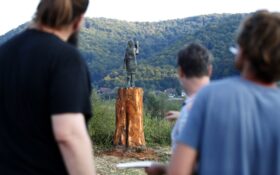 A bronze statue representing U.S. first lady Melania Trump was unveiled Tuesday in her native Slovenia to replace a wooden one that was set on fire in July.

The new sculpture is a replica of the original one by U.S. artist Brad Downey and placed near Trump’s hometown of Sevnica, in central Slovenia.

The original statue was torched by unknown arsonists on July 4th. The rustic figure was cut from the trunk of a linden tree, showing her in a pale blue dress like the one she wore at Donald Trump’s presidential inauguration.

A plaque next to the new one reads it is “dedicated to the eternal memory of a monument to Melania which stood at this location.”

“We are here today because we put up again a statue of Melania to the place where it was burnt and to commemorate the statue that was set on fire,” said Slovenian artist Marko Vivoda.

The life-sized sculpture bears no obvious resemblance to the U.S. first lady.

Born Melanija Knavs in nearby Novo Mesto in 1970, the new U.S. first lady grew up in Sevnica while Slovenia was part of the Communist-ruled former Yugoslavia. An Alpine nation of 2 million people, Slovenia is now a member of the European Union and NATO.