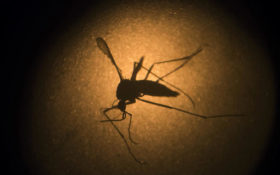 Scientists say an invasive mosquito species was likely responsible for a large malaria outbreak in Ethiopia earlier this year, a finding that experts called a worrying sign that progress against the disease is at risk of unraveling.

The mosquito species, known as Anopheles stephensi, has mostly been seen in India and the Persian Gulf. In 2012, it was discovered in Djibouti and it has since been found in Sudan, Somalia, Yemen and Nigeria. The mosquitoes are suspected to be behind a recent rise in malaria in Djibouti, prompting the World Health Organization to try to stop the insects from spreading further in Africa.

On Tuesday, malaria scientist Fitsum Tadesse presented research at a meeting of the American Society of Tropical Medicine in Seattle, suggesting that the invasive mosquitoes were also responsible for an outbreak in Ethiopia.

In January, health officials in Dire Dawa, a major transportation hub, reported a rapid rise in malaria. Tadesse, lead scientist at the Armauer Hansen Research Institute in Addis Ababa, jumped in with his team to investigate. They tracked more than 200 malaria cases, examined nearby mosquito sites and tested invasive mosquitoes for the malaria parasite.

“This new evidence is terrifying,” said Thomas Churcher, a professor of infectious disease dynamics at Imperial College London, who was not connected to the research.

He said most malaria spread in Africa has been in rural areas, as native mosquitoes don’t usually like breeding in polluted cities or artificial containers like buckets. But the invasive mosquitoes can thrive in such conditions.

“If these mosquitoes get a toehold in Africa, it could be phenomenally bad,” he said. The main mosquito-control measures used in Africa — like bed nets and indoor spraying — aren’t likely to work against the invasive bugs, since they tend to bite people outdoors.

Ethiopian malaria researcher Aklilu Getnet said officials have seen a major rise in the disease this year. He blamed longer rainy seasons and the conflict in northern Ethiopia, which has drained resources away from malaria.

“We are very worried,” he said, saying that until recently, Ethiopia had seen a big drop in malaria. “What we are seeing now is a significant increase.”

Anne Wilson, an infectious diseases expert at the Liverpool School of Tropical Medicine, said African communities might consider adapting measures used in India to fight the mosquitoes, like introducing fish that eat the larvae or prohibiting containers with standing water.

She said slowing progress against malaria is further complicating efforts to stop the parasitic disease, which is estimated to kill more than 600,000 people every year, mostly in Africa.

“We’re waiting to see the impact of new tools like pesticides and vaccines,” she said. “But if this mosquito starts to take off, we may be out of time.”