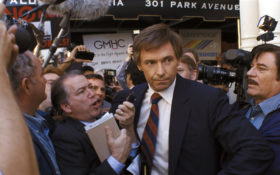 Ask most people, and if they’re old enough to remember anything at all, it’s that famous photo of the doomed candidate with a smiling Donna Rice in his lap, on perhaps the most unfortunately named yacht in American political history: “Monkey Business.”

What most people don’t recall, or never even knew, is that the photo emerged two weeks after the 1987 scandal had ended in Hart’s withdrawal from the Democratic race, his hugely promising political career destroyed over suspicions that he’d had an affair with Rice.

The fact that people assume the photo led to Hart’s humiliating downfall is just one of many ways in which the whole ordeal is mis-remembered, says Jason Reitman, director of “The Front Runner,” which stars Hugh Jackman in an appropriately tense, anguished turn as the Colorado senator who rose fast and fell faster.

“The story really plays with our sense of memory,” Reitman says. “First people recall ‘Monkey Business,’ so they’re remembering a joke, and then it’s, what was that blonde’s name?”

The fact that Rice was a human being (also a Phi Beta Kappa college grad) and not just a blonde on a boat is one point that “The Front Runner,” based on a 2014 book by journalist Matt Bai, seeks to drive home. But the larger point is that the Hart saga, far from a party joke, marked a watershed moment in American politics and culture, with reverberations that continue to this day.

Why? Because it was the moment when politicians became celebrities, and their private lives became our public business, even our property, Bai argues. It changed political journalism, too, he says, and created a different kind of candidate, perhaps forever.

“It’s this moment in 1987 when the worlds of politics and entertainment collide,” says Bai, who co-wrote the screenplay with Reitman and former political operative Jay Carson.

A quick historical primer: Hart was way ahead in the polls to take the 1988 Democratic nomination and face GOP nominee George H.W. Bush. But rumors of marital infidelity arose, and a tip led Miami Herald reporter Tom Fiedler to stake out an alley near Hart’s Washington townhouse, where the 29-year-old Rice, with whom Hart had connected on a Bahamas cruise, was believed to be staying. Fiedler and his team confronted Hart. He refused to answer questions about his private life. Soon after, amid unrelenting scrutiny on his family, he quit the race.

Hart wasn’t exactly the first American politician to be felled by a sex scandal — seen “Hamilton,” anyone? — but before him, routine sexual peccadilloes were usually considered off-limits. If they hadn’t been, many others, say John F. Kennedy and Lyndon B. Johnson, wouldn’t have survived. But Hart came along at just the wrong time, says Thomas Patterson, professor at Harvard’s Kennedy School of Government.

Patterson argues that Watergate, obviously the seminal political scandal of the ’70s, had spawned a more aggressive type of political journalism, tasking reporters with exposing the lies of politicians — no matter how small.

“If Hart had been luckier, journalists would have been a decade behind where they were at this point,” says Patterson. “But Hart becomes the poster child, the first casualty, of an attack journalism that was really a product of Watergate, and journalists’ sense that they couldn’t trust politicians.”

Each team member behind “The Front Runner,” which will be in wide release on Nov. 21, has their own takeaway from the Hart story. For Carson, it’s how “this world where I wanted to effect positive change ended up being so soul-crushingly awful.”

Then there’s Jackman, who confesses he knew little-to-nothing about Hart beforehand: “I was a traveling backpacker on a gap year!” The Aussie actor traveled to Colorado to spend time with Hart, seeking to portray a multi-dimensional human being.

“Certainly my focus was on Gary and the man he was,” Jackman says. “But I’m left thinking about the question of principle and ethics.” For Hart, but also for other characters in the film like campaign workers and journalists, “there were lines not to be crossed,” Jackman says, “and it got simplified down to, ‘Did he have an affair or not?'”

“It wasn’t that simple,” Jackman adds. “For Gary, it was the principle of, if he starts answering those questions, he’s going to sully the process for other people, evermore. He felt like, ‘If I start talking about boxers or briefs, or the name of my dog, it’s over.'”

Of course, it was Bill Clinton who famously answered the boxers-or-briefs question. And for his own canny survival as a candidate, he may have Hart partly to thank, says Patterson at Harvard.

“Jump ahead four years, and Clinton had learned from Hart, from his failure and the damage it had done,” he says.