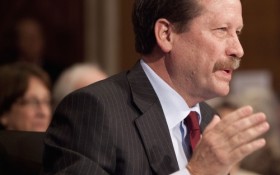 A Senate panel on Tuesday approved Dr. Robert Califf to be commissioner of the Food and Drug Administration, but President Barack Obama’s nominee may face trouble.

Sen. Lisa Murkowski said she will hold up a vote on the Senate floor until she has reassurances from the agency that genetically modified salmon will be labeled. The Alaska Republican has said the engineered salmon approved by the agency last year could be harmful to her state’s wild salmon industry.

Califf is now the No. 2 official at the agency, which regulates consumer products from medications to seafood to e-cigarettes. He was a prominent cardiologist and medical researcher at Duke University for more than 30 years.

Murkowski is angry that she didn’t get more of a warning about the agency’s approval of the modified fish, which she has long opposed. The FDA approved the salmon two days after Califf’s November confirmation hearing.

“If they are trying to get my support, they sure fumbled that ball,” she said after the hearing.

Califf’s nomination does have the support of the Republican chairman of the Health, Education, Labor and Pensions Committee, which approved the nomination by voice vote. Tennessee Sen. Lamar Alexander said Califf has been thoroughly vetted, and he is confident that Califf can lead the agency “fairly and impartially.”

As head of the FDA, Califf would inherit a raft of projects and potential challenges, including unfinished tobacco regulations and food safety and labeling reforms.