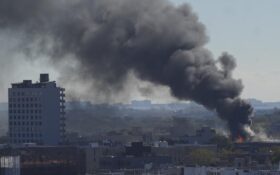 No injuries were reported Wednesday in a fire on the top floor at a Brooklyn building that’s home to U.S. Rep. Yvette Clarke’s district office.

Firefighters worked for about two hours on the blaze at 222 Lenox Road, which sent dark smoke billowing over the borough’s East Flatbush neighborhood.

The fire at the seven-story building was reported at 10:40 a.m. and firefighters arrived within four minutes, Chief of Department Thomas Richardson said. It was placed under control at 12:42 p.m.

The blaze was contained to four top-floor apartments and what’s known as the cockloft, a small space between the top floor’s ceiling and the roof, Richardson said.

Clarke’s office is located on the building’s ground floor and didn’t suffer any damage.

In a statement, Clarke thanked firefighters “for their speedy response and swift action and professionalism.”

She said her “heart goes out to everyone affected by this fire” and that her office remained open and her staffers safe.

Richardson said the fire department’s response was not impacted by staffing issues related to the COVID-19 vaccine mandate for city workers. A fire company that was relocated to a nearby firehouse to cover staffing shortfalls responded in place of one unit that was out of service, he said.

About 170 firefighters and EMS personnel responded in all, the fire department said.

“We had plenty of help,” Richardson said. “Firefighters got up there with several hose lines and they were able to expose the fire and extinguish it fairly quickly.”

The cause of the fire is under investigation. Richardson said construction work was being done on the roof, but it was too early to know if that was a factor.

The fire department’s response time was far quicker than the FDNY’s average for structure fires, but officials said a car parked in front of a fire hydrant caused a delay in firefighters getting water on the fire.