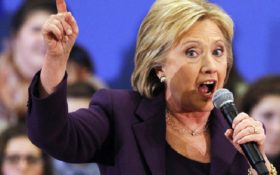 Lock her up was a common chant at then-Republican presidential candidate Donald Trump’s 2016 rallies.

That chant could be coming back in time for the 2020 election.

The emails were obtained by seven different Freedom of Information Act lawsuits filed by Judicial Watch in 2015.

“The new emails include an October 13, 2012, message from Clinton telling private attorney Robert Barnett about a conversation with Jake Sullivan, Clinton’s senior advisor and deputy chief of staff, about Benghazi: ‘Jake and I were discussing the Benghazi security issue since he tried to tell [Redacted] would be asked about it but they didn’t think so. Might be good for you to call Jake too.’ Clinton also mentions then-candidate Mitt Romney’s ‘47% remark,’ referring to his dismissal of Obama voters as irresponsible,” Judicial Watch reported.

The emails included political strategies for dealing with the media and advancing then-President Barack Obama’s agenda, a daily agenda of Hillary’s during her time as secretary of state (which was almost completely redacted), and discussions about U.S. strategy in Afghanistan.

“Magically, after years, the FBI finds more Clinton emails that are classified, involve Benghazi, and detail communications with President Obama,” said Judicial Watch President Tom Fitton said in a statement. “This drip, drip game that the DOJ, FBI, and State are playing is a key reason a federal court authorized more discovery, including the sworn deposition of Hillary Clinton.”

Hillary’s use of an illegal private email server to discuss classified and sensitive U.S. government information — and the alleged perjury surrounding the cover-up regarding a radical Islamic terrorist attack in Benghazi — has caused controversy for years.

Yet, inexplicably, Hillary and her team were able to walk away from the controversy without criminal charges.

Fitton and his Judicial Watch team haven’t forgotten — and they’ve recently been leading a push to force Hillary to testify under oath.

Hillary Clinton files desperate appeal of lower court order that she testify under oath on her emails and Benghazi attack records… https://t.co/MZjGhPzRHP