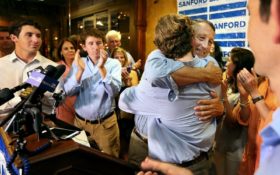 President Donald Trump is crediting his Election Day tweet in part for the defeat of a South Carolina Republican congressman who has been critical of his administration.

Trump tweeted Wednesday that his advisers didn’t want him to get involved in the Republican primary, thinking Rep. Mark Sanford “would easily win.”

But Trump says Rep. Katie Arrington “was such a good candidate, and Sanford was so bad, I had to give it a shot.”

My political representatives didn’t want me to get involved in the Mark Sanford primary thinking that Sanford would easily win – but with a few hours left I felt that Katie was such a good candidate, and Sanford was so bad, I had to give it a shot. Congrats to Katie Arrington!

Arrington narrowly defeated Sanford after Trump tweeted that Sanford had been unhelpful, adding, “He is better off in Argentina.”

That was a reference to Sanford’s surprise disappearance from the state as governor, which he later revealed was to further his affair with an Argentine woman.

Sanford’s loss was perhaps the most dramatic result in primaries across five states Tuesday.

He becomes the second incumbent House Republican to lose a primary this year — the latest never-Trumper to lose in the Trump era.

Sanford’s voting record is generally conservative, but his criticism of Trump as unworthy and culturally intolerant made him a target of dedicated Trump supporters.

Sanford had never lost a political race in South Carolina, and his defeat Tuesday was an abrupt end to a roller-coaster political career. Despite the scandal over the affair, he completed his second term as governor, and voters sent him to Congress two years later.

In her victory speech, Arrington asked Republicans to come together, saying “We are the party of President Donald J. Trump.”

Four other states voted Tuesday, including several races that will be key to determining which party controls the House of Representatives next year.