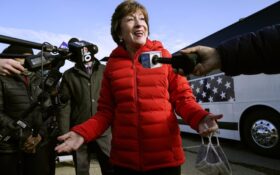 Sen. Susan Collins, R-Maine is already on the outside of her party looking in over her dislike of former President Donald Trump.

Now, she’s giving her colleagues another reason to keep their distance.

According to an Axios report, Collins is caught in the web of an illegal campaign finance scheme…

And as a result, the notable “Never Trumper” is under investigation by the FBI.

Martin Kao — a defense contractor who was indicted last year — and his wife set up a bogus company to help write a check to fund the super PAC.

Kao and Collins have a history. The Maine senator helped Kao secure a massive $8 million research award in 2019.

So it seems as though Kao returned the favor with the donation.

But the whole thing was phony and what they did was illegal, authorities say.

The company Kao set up, called Society for Young Women Scientists and Engineers, was allegedly an empty shell corporation.

According to sources, it’s not clear that Collins knew the large donation was illegal.

“The Collins for Senator Campaign had absolutely no knowledge of anything alleged in the warrant,” Annie Clark, spokesperson for Collins, said.

Government contractors such as Kao are prohibited from donating to federal PACs.

Many pundits on social media took the opportunity to pounce on Collins.

“This is deeply troubling,” wrote Erie Siobahn. “We should all be concerned.”

This is deeply troubling. We should all be concerned.