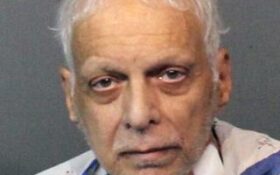 A longtime lawyer in Nevada was preparing for a political career, following his tenure as deputy attorney general in the state. He later aimed even higher and ran for state Supreme Court, an elected office in Nevada.

However, he saw his reputation diminish over time, and he became affiliated with the state’s infamous Mustang Ranch brothel.

Now he’s been arrested in Reno as a suspect in a 1972 homicide in Hawaii.

Tudor Chirila Jr., 77, was being held Thursday in the Washoe County Jail without bail on a charge of being a fugitive from another state.

The Honolulu Star-Advertiser first reported that Chirila was arrested Wednesday — five decades after police say he stabbed the teen more than 60 times and left her body in her Waikiki apartment on Jan. 7, 1972. Anderson had moved to Hawaii in October 1971 and was working at a McDonald’s restaurant after graduating from high school the year before in Bay City, Michigan, the newspaper said.

It wasn’t immediately clear if Chirila had an attorney or will be appointed one. Jail records don’t indicate when he’s scheduled to make his initial court appearance.

The criminal complaint filed this week in district court in Hawaii said police had reopened the cold case multiple times since the killing and received a tip in December that Chirila could be a suspect.

In March, police obtained a DNA sample from Chirila’s son, John Chirila of Newport Beach, California, that identified him as the biological child of a DNA sample found at the crime scene, according to the criminal complaint.

On Sept. 6, Reno police served a search warrant and collected a DNA sample from Tudor Chirila at his Reno apartment. Two days later he tried to commit suicide, and on Wednesday was booked into the county jail in Reno, the Reno Gazette Journal reported Thursday.

Over the years, police in Hawaii investigated multiple suspects, including door-to-door knife salesmen who were there to try to sell knives hours earlier, the newspaper said. But the salesmen volunteered fingerprints and passed polygraph tests.

Other potential suspects questioned over the years included Anderson’s former boyfriends and the property manager where she lived.

Chirila, a longtime attorney in Reno, Carson City and the Lake Tahoe area, served as a deputy attorney general in the late 1970s and ran unsuccessfully for the Nevada Supreme Court in 1994.

In a 1998 federal indictment, U.S. prosecutors in Reno identified him as the former president of a company, A.G.E. Corp., that served a front for Nevada brothel boss Joe Conforte.

The indictment accused Conforte and others of being part of an elaborate conspiracy to defraud the government in bankruptcy proceedings when the Mustang Ranch east of Reno was seized by the IRS, sold for back taxes in 1990 and illegally repurchased by Conforte and his cohorts.

The government claimed Conforte hid his assets during bankruptcy proceedings to cheat the government and buy back the legal brothel under hidden ownership, The Associated Press reported at the time.

Testifying as a government witness, Chirila acknowledged he knew the corporation was owned and controlled by Conforte, who had disappeared and was believed to be a fugitive in South America when the case went to trial in 1999.

Chirila filed suit against Conforte in 1998 seeking $14 million in damages, alleging Conforte wrongly fired him for cooperating with federal prosecutors.