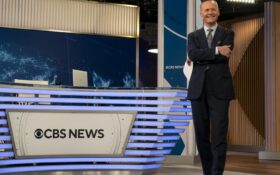 For more than half a century, ABC, CBS and NBC have aired evening newscasts each weeknight on television. This fall, the competition has spread to another medium.

The launch of John Dickerson’s “CBS News Prime Time” in September means that all three news divisions have unique streaming newscasts at night, a nod to the future and bid to reach young people who aren’t watching television at dinnertime.

Dickerson’s newscast debuted nearly a year after NBC’s “Top Story” with Tom Llamas. ABC’s “Live Prime” with Linsey Davis started in February 2020. Each streams live for at least an hour starting at 7 p.m. Eastern and are repeated later in the evening. All can be seen for free.

“The revolution will not be televised,” Davis quipped. “It will be streamed.”

She and her rivals have big ambitions.

“We want to be the best news show, period,” Llamas said. “I don’t want to be just the best show on streaming.”

Looking past the similarities, they each have intriguing differences in approach, more so than the broadcast evening news shows led by Lester Holt, David Muir and Norah O’Donnell.

The streamcasts almost certainly don’t approach those numbers, although if anyone knows for sure how many people are watching, they aren’t telling. There isn’t a single outside source that measures audience size, like the Nielsen company does for TV. The networks all say the shows are catching on, but won’t share their own statistics with competitors or the public — often a sign that those levels are low.

Dickerson brings the most broadcast experience to his role, having reported for “60 Minutes,” moderated “Face the Nation” and hosted “CBS This Morning.”

At its launch, his streamcast quickly distinguished itself as the most interview-heavy of the three. He will debrief CBS News reporters who have done television stories to empty their notebooks of additional details, and find experts for conversations on the day’s major stories.

“I’m interested in who the person is who may not even be known, but knows what is going on,” Dickerson said. “It’s great to be able to ask the experts yourself, whether the experts are within CBS or not.”

Probing with experts to tell people more about stories they may have seen flash by in headlines leans into Dickerson’s strength as a journalist, said Anthony Galloway, CBS News Streaming senior vice president.

The most established streamcast, ABC’s “Live Prime,” takes advantage of what streaming has to offer over television right now: time. Davis’ show is most apt to stretch reports beyond what can be seen on TV’s “World News Tonight.” After Muir traveled to Ukraine, the streaming show gave him 10 minutes to report on what happened in a village recently liberated from the Russians. That kind of length is a luxury seldom afforded on television evening news programs that have roughly 22 minutes of news between commercials.

A profile of the jam band O.A.R. stretched like a guitar solo, and correspondent Phil Lipof even went onstage to play with the band.

“Live Prime” airs for an hour and a half, although the last half hour is largely a shortened summary of what had been on before. The CBS and NBC shows are an hour.

Getting “Live Prime” started before its rivals allowed for more research time, said Reena Mehta, ABC’s senior vice president for streaming and digital content. She said it’s not ABC’s goal to replicate the linear television model, and the program essentially has the capacity to go live all evening. The form of these programs, though, is hardly a shock to television viewers.

For NBC, Llamas packs his fast-paced show with as much information as possible.

Llamas, a Cuban-American, makes sure to report on Latin American issues on each show. He talks about binge-worthy entertainment. Producers comb social media and local NBC stations for news, although there’s an occasional reliance on eye candy — things like car chases that are on because the video is interesting, not because it’s newsworthy.

There’s no evidence that the streamcasts are cutting into viewership of the televised evening news shows. The networks show no signs of abandoning them, either: NBC, for example, has quietly and successfully aired Holt’s “Nightly News” on YouTube, part of a strategy of finding an audience wherever it can.

The news divisions say they have not built the evening streamcasts to replace the television product. “I feel like it’s a nice complement to ‘World News,’” Davis said.

Besides, the television and streaming audiences tend not to overlap much.

Although there are no specific numbers for “Top Story,” NBC says that its streaming service overall gets an average of 100 million views each month. The pandemic brought in more viewers and people continue to cut the cable television cords.

“There’s no real turning back the clock here,” she said.